Where does the time go? Only last year I blogged about my god-daughter Hope who had her first proper launch event. After a very busy year, she’s now released an EP album, called “Optimist” – that seems to be gaining some traction and climbing up the singer/songwriter charts.  Now all of 16, her latest track is available on i-tunes. Perhaps one for the Christmas stocking?

Here’s the title video, which is dedicated to her late father and my very dear friend, who having suffered from a rare form of cancer (mulitple endocrine neoplasia) eventually died from the injuries resulting from a motorcycle crash in August 2006. You can find her on Jacket Records, a new small label run by Jack Hobbs, who also wrote a song for her “So Much More“.

As you know, I’m not a betting man, but I’d suggest that this is best investment for £3.14 you could make this Christmas and help to get the much needed Optimist on the radar.. what’s more you could order it right now from where you are. Happy Christmas. 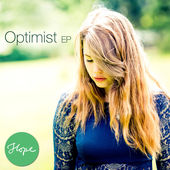