In early December the Department for Work & Pensions announced the proposed increases to benefits for 2021/22. Most of the working age benefits and the earnings-linked pension benefits, such as the old State Second Pension, will rise by 0.5%, in line with annual CPI inflation to September 2020. However, the new state pension and its predecessor will both increase by five times as much.

Both new and old (basic) state pensions benefit from the Triple Lock, which currently requires an increase which is the greater of:

For the 2021/22 increase, the 2.5% minimum was a clear winner, with earnings growth at the bottom of the trio. As the chart shows, in this context earnings growth is a misnomer; earnings fell by 1% over the year because of the impact of the pandemic. 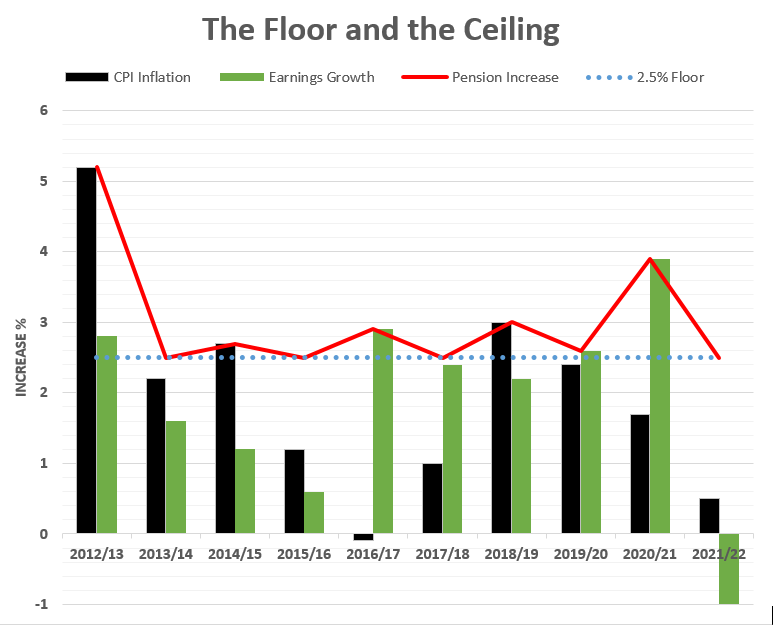 10 YEARS LATER… NOT ON PLAN

Over the ten years to 2021/22, the 2.5% floor has been the basis for four increases, something which was probably not anticipated when the Triple Lock was announced by the coalition government in 2010. Then, as now, the Bank of England’s inflation target was 2.0%. Earnings were expected to outpace inflation by 1% or more, making the 2.5% floor a safety net that probably would only be called upon in a deep recession.

It has not worked out that way. Earnings and inflation have virtually matched each other over the period at just under 2%. In other words, there has been no increase in the buying power of average earnings over the past ten years. In contrast the Triple Lock has delivered a real terms increase of almost 11%. If you are on the receiving end of the Triple Lock, that is good news, but if you are under State Pension Age (66 now, don’t forget) it means more government expenditure you have to finance.

The Triple Lock has been widely criticised by experts ranging from the Institute for Fiscal Studies to the Pensions Select Committee for being an unnecessarily expensive protection that creates intergenerational unfairness. In private politicians would generally agree but, at the last Election, all of the mainstream political parties committed to retaining the Triple Lock. The pensioner vote is not one to put at risk.

The pandemic may have changed that mindset. Last year the government introduced emergency technical legislation to ensure the Triple Lock would work in the face of zero earnings growth. However, the measures put in place only applied for a single year. There have been suggestions that, if no action is taken, an earnings bounce in 2021 as the economy recovers could mean a 5% 2022/23 increase under the Triple Lock formula at a time when inflation is below 2%. Given the dire position of public finances, such a scenario would offer Rishi Sunak the golden opportunity to justify a reworking of the Triple Lock.

Despite the new state pension’s outpacing of inflation and earnings growth, it will remain a distinctly modest sum in April 2021: a maximum of £179.60 a week. Viewed another way, that is equivalent to just over 20 hours’ work at the National Living Wage rate for 2021/22 (£8.91 an hour) or a little under one-third of current average earnings (£560 a week). No wonder the UK is likely to remain in bottom place of the OECD’s league table based on the proportion of earnings replaced by state pensions…

If you want to check your projected state pension benefit, CLICK HERE TO GO TO THE STATE PENSION SITE.

The state pension is not enough for a comfortable retirement. Make sure you talk to us about how you should be supplementing it – preferably before the Budget.