Can I earn sacrifice?

I was watching the 1998 movie “Saving Private Ryan” again recently and quite apart from the feelings that it naturally invokes, I was captured by one of the last lines of the film. As Captain Miller (Tom Hanks) is dying, he whispers “earn this…. earn it” to Ryan (Matt Damon) … at least that’s what I think he said… this is then followed by a scene many years later at the grave of Captain Miller in Normandy when Ryan turns to his wife and rather desperately asks “Am I a good man?” in the hope that he had indeed earned his freedom. 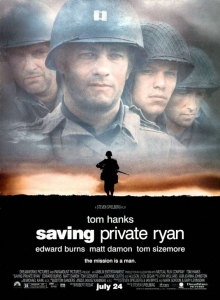 Now, I like the film and the Captain Miller character, but really – earn it? surely this is a last exasperated frustration at the unfairness of his death, not meant as some sort of life-bond to payback the sacrifice… which is frankly impossible – and as a teacher, Miller would have, in a less stressful environment appreciated as much. Certainly be eternally grateful, remember and bear witness to the huge sacrifices made… but to earn it? we can’t. We cannot earn our freedom, it is simply given… surely.

Anyway, it made me wonder whether others have lived under the pressure to earn back the sacrifices made. Children are sometimes in this scenario, yet it is parents that choose to make the sacrifices, not the child. We make sacrifices surely because we are working towards and hoping for a better future, these are choices. We make them frequently in all sorts of ways. Money and the “sacrifice” of denial of self (and thus pleasure) raises different issues for each person. A basic budget implies some sort of sacrifice, building a pension fund involves a sacrifice of spending now… delayed gratification. To me the term is way too harsh in these contexts – what we are really talking about is making a choice and choosing to plan for the future rather than live for the present. This is a frequent tension in financial planning for anyone… do I save for tomorrow? (which I may not see) or do I blow it all now? It will be interesting to observe how those retiring this year will handle this question. The new pension freedoms pose precisely this dilemma…of course somone turning 65 in 2015 was born in 1950, after the war…but they too have made sacrifices over the years… the question will ultimately be – have they made enough?