Jurassic World: Fallen Kingdom is yet another version (the fifth) of the 1993 hit Jurassic Park. What was once, a milestone for special effects, now rather like the re-engineered dinosaurs is all too familiar. This may have something to do with the financial success of the immediate predecessor, which was the biggest in the series in terms of actual takings ($652m) and this latest film has already taken $333m since June 22nd. Hence the reason for hashing together the same story with minor alterations.

As predictable as the story is, there was a growing unease as I found asking myself “why have I paid to watch the same movie yet again?”. Perhaps that is precisely the point. Why on earth to we never learn from our mistakes of the past, or at least seem unable to.

Fallen Kingdom might be a metaphor for the monsters that we tolerate within our midst. The stereotypes that seem intent on only advancing methods of ruining lives rather than improving them. Men paid to fulfil the orders of the rich, psychopathic and powerful and who never question loyalty to anything other than their own self-interests. That which was once thought long extinct has risen and is now marauding local communities whilst wearing a rosette. The monsters are amongst us, Pandora’s box is open. 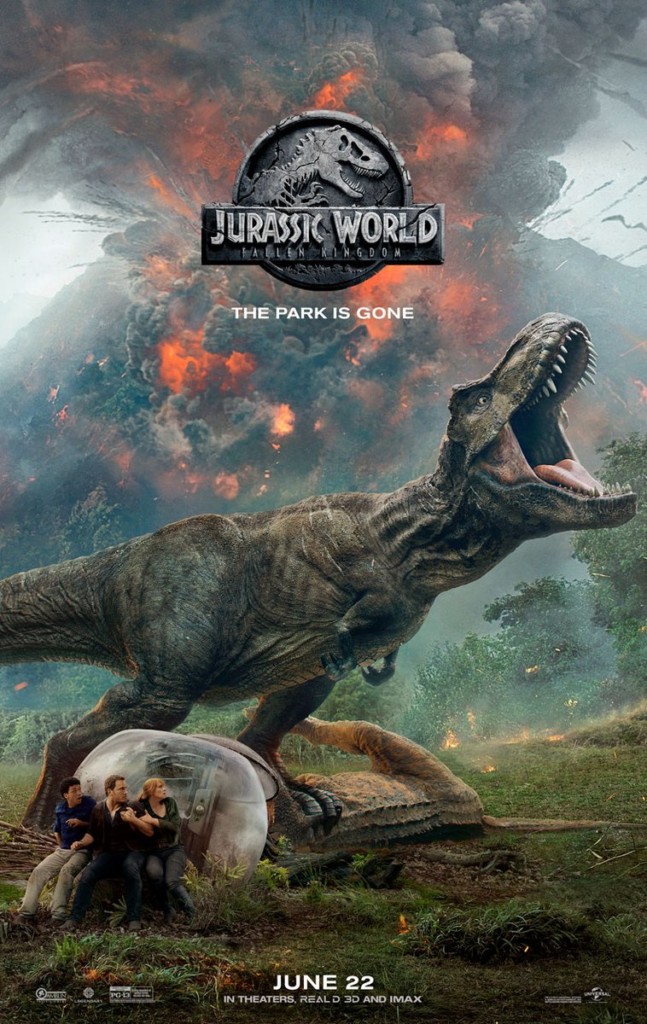 As the movie is so much like any of its predecessors, the notion of a spoiler alert seems somewhat redundant, but here is one. There is a sequence in the movie where dinosaurs are auctioned to the usual crowd of despots, criminals and oligarchs. Some are merely using these for “big game hunting” but some to terrorise. The latest “newly improved” DNA adjusted monster is proclaimed to be the ultimate killing weapon. A dinosaur that can be controlled. The control is administered with a laser-sighted automatic weapon, pointed at the victim, dino locks on, and then the bug red button is depressed to release a sound that sends dino into a killing frenzy. This work of deadly genius fetches $28m. Now I have a couple of problems with this. Firstly, if you can point an automatic weapon at your intended target, why do you need a dinosaur? Secondly, if this is the ultimate soldier, a winning bid of $28m seems a few billion off the mark. Have they ever seen the “Defence” budget?

He’s Coming to Get You…

The closing sequences of the film are utterly daft, with said monster tracking small child through an American “mansion” (one cannot escape thinking that this is designed with a theme park ride in mind) in the pouring rain, locating her bedroom, like something more out of Monsters Inc. Second (friendlier monster called “Blue” saves the day, thrusting beast onto the magnificent ancient remains of triceratops skull. The ancient overcomes the new. Girl then exposed as being a work of genetic magic herself, then releases remaining captive dinosaurs into the local community, who we are now told will have to co-exist and live with the consequences. Well, its about as daft as some of the political waffle that we all see on “the news” in its various forms.

The monsters are arguably within us all, some are more obvious – displaying their basic qualities and frenzied outbursts, be that on twitter, Question Time or perhaps in a local IKEA store, the local pub, the centre of London or lurking in the shadows quietly moving the pieces into place as less regard for life and communal harmony become evident. There are moments when I despair, yet continue to live in the hope that civility, fairness and peace will eventually triumph, which first has to start with my own behaviour.

So the financial lesson – investor behaviour will make or ruin you. Following the crowd, being led by the noise, “everyone is doing it” intoxicated by the illusion of not needing to think will be a quick and painful way to watch your money flee to a new home. Know what and who you are dealing with, don’t mess with the cages, just because you can, does not mean you should.

Here is the trailer for the movie Jurassic World – Fallen Kingdom.