Perhaps my age is showing, but it is only day 6 of the new year and I am already fed up with the election campaign. I ought to be celebrating our democracy and the opportunity to hear reasoned arguments, however inevitably we seem stuck in a cycle of who will tax or cut most, the prospect of genuine change and improvement for all seems rather unlikely with the inevitable tension around money and power. 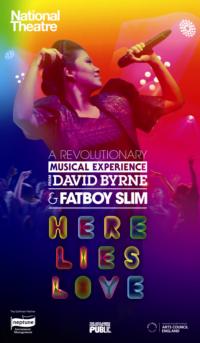 In a more reflective moment, I remind myself that this is not a dictatorship and we at least get to vote and I don’t really think we are at the mercy of a despot who has anger issues and a twitching finger poised over an end-all button. This isn’t the case for millions of “voters” around the world who are marched off to vote for egomaniacs. This in mind, a relatively new musical to arrive via New York at the National Theatre “Here Lies Love” is based on a 2010 concept album of the same name, which gives musicals a nightclub injection. If you think that a nightclub is exclusively for the “young” perhaps think agains as, the creators Fatboy Slim (Norman Cook) is 51 and David Byrne is 62. The production has the flavour of community theatre, with the execution of high-end night club. A moving stage and audience, all combine to great effect and an entertaining, immersive experience.

This is the story of Imelda Marcos, her rise and fall from power. Byrne and Cook wanted to explore what makes powerful people behave the way they do. I’m not so sure that this was explored terribly well, whilst displaying a delusional, drugged up Imelda, she isn’t portrayed that badly – a little bit too vanilla in Manilla – little about her excessive flamboyancy and penchant for hundreds of shoes. The story is chronological, revealing the fragility of her marriage, her inability to cope with her rags to riches story and a familar narcissism of Heads of State that seem to believe that they “give their all to their people”.

The Price of Democracy

There was little in the musical that gave me reason to believe such behaviour was understood or how to spot it in others and take precautionary action…so no tips for our elections. The world seems to have done little during the period of martial law and  assassination of the opposition including the shooting of Benigno Aquino on the steps of his ill-advised return flight to Manilla on 21 August 1983 (age 50) which you may remember. In the Philippines, the Marcos regime was eventually cast out by a peaceful protest, following a corrupt election (February 1986) against Aquino’s widow following which the public simply decided enough was enough. Marcos and his family took US advice and support then fled to Hawaii along with 24 suitcases of gold bullion and jewellery. Sadly for Imelda this took precedent over her 2,700 pairs of shoes. It is estimated that Marcos stole over $10billion from the country, much was invested into various family related businesses and Swiss accounts. The Swiss have so far returned about $684 million. So for me, this musical, whilst being entertaining does little to understand how and why power corrupts so absolutely. Indeed one might argue that the catchy tunes, flashing lights distract from the real story… but then, perhaps that’s the point.