If you follow me on twitter you may be aware that I was raising some concerns about the reporting of an item on BBC Radio 4 Money Box and BBC1 Breakfast about interest-only mortgages. Let me be clear I do not provide mortgage advice – we refer this to someone that does – should anyone require it, we encourage clients to clear off debt and mortgages as quickly as possible.

Paul Lewis relates the story of Christine, a woman now 70 years old, bought her flat in Liverpool in August 2004 at the age (I assume) of 58 with a ten-year mortgage of £151,774. It was an interest only mortgage, meaning that she was only paying interest, not the loan which would need repaying at the end of 10 years. Having had 2 years extra time to repay the money, her lender (Santander) has now given her until 24th November 2016 to do so or face legal proceedings.

There is not enough information (as ever) in the story presented to be able to provide any solid advice. We are told that there is no equity in the property (the value of the flat less the mortgage). This could be because the flat has not increased in value at all since 2004 (which whilst possible seems a little unlikely) or it could be that she has amassed other debt which has wiped out any equity that built up over the last 12 years. The reality is we don’t know and in any event, this is the situation she is now in. 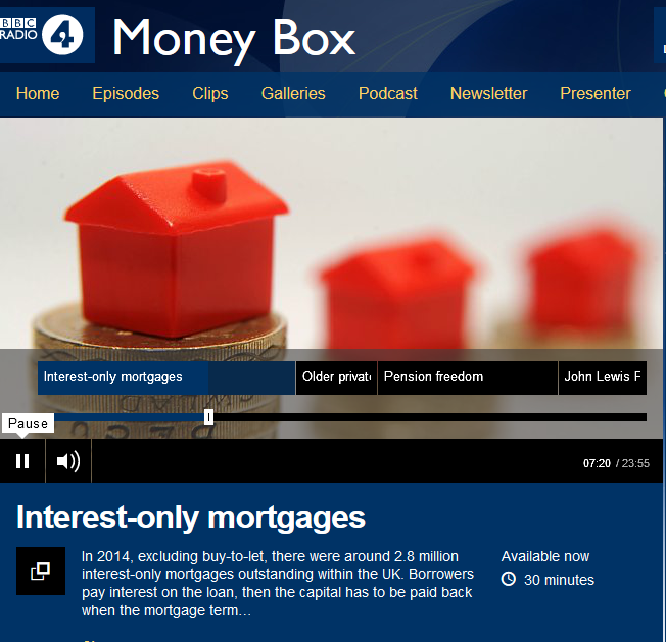 We are told that Christine now (in 2016) has an income from pensions of £1,100 a month and her mortgage costs her £600 a month. It is unclear if she has any other savings. The story is clearly upsetting to Christine, but I am suspicious of what is being reported.

If the angle for Money Box is the possible miss-selling of the mortgage then some better factual information is really required. As I have said I don’t arrange mortgages, but it would be unusual for someone to borrow £151,744 without an income to justify this (typically 3.25x income, which would mean requiring an income of about £46,700. Being 58 at the time she was only 2 years away from receiving her State pension. So what income did she declare? And was the lender really offering a 58-year old a 100% mortgage within 2 years of retirement? Now that would have some grounds for complaint about bad advice. She cannot “recall” being offered a repayment mortgage or anyone asking her how it would be repaid.

But there was a foreign property…

Christine is certainly very unclear about what an interest-only mortgage is, thinking (for a some reason that it would continue) when she knows it wouldn’t (not outstanding until she dies) and of course would be clearly stated on the annual statements and original mortgage offer. Christine provides what appears to be conflicting information, recalling when asked how she expected the mortgage to be repaid, she mentions an intention to sell a foreign property to help do so. Sadly this “crashed” but again merely demonstrates that rather more (and better) questions need to be asked. More information is needed, but is woefully lacking.

When Christine was asked a direct question “Did you not understand what interest only meant?” she replies “Yes, you were just paying off interest that they were charging on the house itself and not off the property. That is how it was sold to me”. The reporter does not challenge her statement which makes no sense at all unless by “house” and “property” she really means mortgage/loan or capital (read it back to yourself).

The only clear thing is that she appears confused, not fully understanding how mortgages work and is certainly distressed. Money Box seem concerned that lots of people are in a similar position, reporting that over 160,000 interest-only mortgages are due for repayment within the next 2 years. Money Box report that about 2million people have interest-only mortgages and that 1 in 8 (12.5%) of them appear to be like Christine, not realising that the money needs to be repaid (though presumably having been asked the question they do now know). Importantly 40% claim that they will struggle to repay the mortgage in full.

This of course is probably the real scare story or anxiety that Money Box wishes to convey and the implication being that this is the fault of unsafe products and a bad industry of bad lenders and bad mortgage advisers…. which will lead to are creating more homelessness. Well as with all things, there are likely to be some, (bad ones) but such generalisations and calling for yet more regulation is a far stretch, when in practice this has more to do with some people not understanding the commitment that they are making or claiming not to understand.

There are more options than you think

Christine is very worried, understandably, she has my sympathy, yet it seems that the only options she has discussed (remember there is a financial adviser “on hand”) is going into an old peoples home or a hostel. It sounds to me as though her adviser is pretty useless if this is the case. A quick search of properties to rent in Liverpool for £600 or less reveals over 2,000 listed as available.

The Power of Denial

“It’s a terrible thing that’s happened, that I never thought it would come to this”. Well it is certainly hard, but Christine has £1100 a month of income and can chose how to use it. Renting is a viable option. So I am left feeling that this is more a report on the power of denial – denial of reality. Something has clearly gone very wrong, with poor budgeting and planning. This does not make Christine innumerate, frankly successive Governments fail far more spectacularly and one wouldn’t really accuse them of innumeracy or financial illiteracy, as tempting as it may be.

I’m left with the impression that this is a story of not wanting to understand, rather than not being able to understand, which is perhaps true of Money Box as well. Accusing lenders or advisers of mis-selling is a very lazy approach, when actually Santander has been providing information and already extended the deadline by 2 years.

Paul Lewis ends the piece with a nod to the debt-counselling charity Step Change, which implies an awareness that there is rather more here than simply clearing the mortgage by selling the flat and what is actually missing is a fundamental grasp of a budget and the reality of consequences. Getting out of depth financially is not a sin, it can easily happen to anyone, (and I do mean anyone… even billionaires!) the key is facing the truth and exploring options carefully.