Most probably know something about Mary Shelley. A new film outlines pieces of her life that when reassembled, form the basis for the story of the neglected, forgotten creature. Whilst the acting is good enough (just about), I regret to say that the tale itself is too slow and stiff, much like the author’s creature. The film is wedded to the notion of historical accuracy, the passage of time is painfully laboured. We can marvel at the sheer determination of Mary as she faces challenge upon challenge, most of which are fabricated by society due to nothing more than how she was pieced together herself by way of her gender. A world in which men quickly scoff and take credit for all things good, detach, ignore or abscond from any sense of responsibility. The notion of giving birth to something loathsome is evident both within her gothic novel and life story, yet it forms the basis of many metaphors today.

There is a palpable sense of the position that money affords those that have it and it is also difficult to escape the notion of the fact that this is essentially a film about young, tempestuous love, which is fuelled with financial advantage – not from Mary, but certainly the men in her life. The loss of her mother, Mary Wollstonecraft (age 38 in 1797) something of a pioneering feminist a few days after her birth is not explored. We, like Mary are left to guess at such a legacy and the “well-read” men she encounters appear not to have heeded Wollstonecraft’s work “A Vindication of the Rights of Woman”. 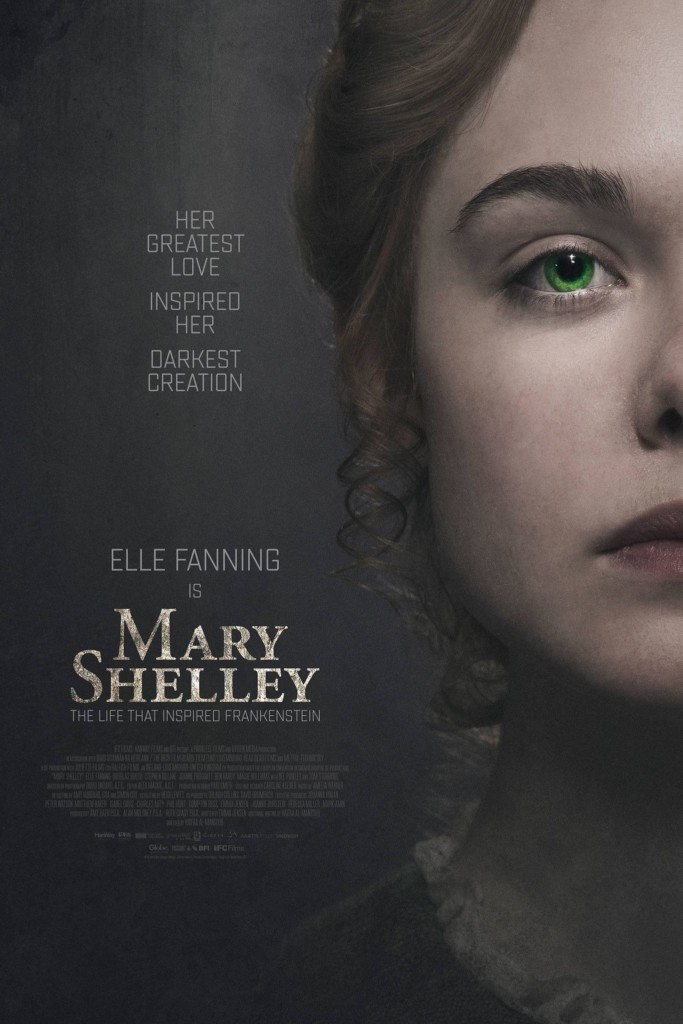 The poet, Percy Shelley (Douglas Booth) who Mary (Elle Fanning) meets at 16 when she is sent away to Scotland to avoid further fractions in her relationship with her step-mother. Percy, 21 at the time, falls for her and eventually follows her back to London, only revealing that he is already married, to someone who he now does not love. The bohemian free movement between relationships he presumes meets with Mary’s support. The men in Mary’s life are not good with numbers, both her father and Percy struggle financially and get out of their depth. A skill in one area of life does not include another. Percy eventually borrows against his future inheritance. All, it seems, because he has fantasies about how he should live.

One Night in Geneva

Lord Byron’s (Tom Sturridge) appearance merely provides yet further resources to alleviate the boredom through various traditional means of escape. I cannot recall quite where I heard it, but I remember someone telling me how they thought that the 1816 dinner-party in Geneva where both Frankenstein (Mary Shelley) and Vampires (John Polidori played by Ben Hardy) were created would be a marvellous night to be a guest at the table. Yet, the night passes damply without any real sense of occasion at all.

History has given credit to Byron as one of England’s greatest poets. What I suspect the film is trying to convey is the sense of his rather selfish sense of entitlement. At 28 he was the eldest of the group in 1816. Polidori being 21 Percy Shelley 24 and Mary just 19. The men, for all their indulgences did not live long afterwards.

Sadly, this film does not do justice to the more radical views of Mary Shelley, instead contorting the story into something that is more like a petulant teen romance. Her own children conspired to hide her feisty nature by doing something of an early Victorian PR work on her character. Mary Shelley was a woman with much to say about society, yet even today most mistake her creation’s very name.

Stories are important to me; your story is the one you tell and want retold (to some extent). Therefore, it seems logical to live by design – on your own terms, how you wish to, not dictated by others. Your finances need to be the architecture around your lifestyle, supporting and ensuring it can continue, but unless you reveal your story to your adviser, how on earth is that possible.