Life is a journey and that new viral ad

I came across a powerful new advert, shared within social media.  This seems like perfect timing for the message of a common humanity as we are only a few days away from voting about continued membership of the European Union, a battle that seems largely to hinge upon immigration and border control, which is fairly odd given that when asked about immigrants most of those opposed seem to always cite people from Syria, Africa (apparently many think this is a country rather than a continent), Pakistan or India… which I believe are still some distance outside of the EU, but hey let’s not confuse ranting with facts.

There is no doubting that it has a great value as a message. However after digging around a little, it seems that all is not quite as it appears. For starters, there’s something to sell. There are actors, not samples of the general population and in fact, DNA is not quite so straight-forward. As I advise some fairly senior medical people, I’ve also asked for some thoughts about it… from a professional medical perspective.

However, that doesn’t undermine the value of the message, we are all connected. 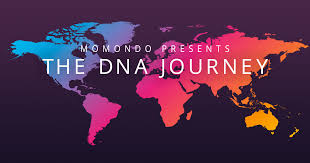 Here is that viral ad…