The movie world is full of theft and deception at the moment, perhaps this is symptomatic of the current state of global politics. This movie, The King of Thieves is yet another film about a real event. This time the Hatton Garden robbery during Easter 2015. You may recall the news items that showed clips of some rather concerned customers who feared and claimed to have lost millions in a robbery that was committed over the Easter weekend, when everyone was on holiday. The initial view was that the crime was perpetrated by a well-organised international gang of jewel thieves. In practice, it was some experience burglars, who were some significant way into their “retirement” and even went to the scene using their own pensioner bus pass.

The casting for the film has been done very thoughtfully. We all know the actors and probably have a fond or favourable attitude towards them, yet these are essentially villains that would do some serious harm to anyone in their way, each other and would not spare much mercy. Old does not mean nice or kind. It just means old. 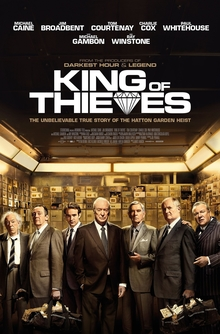 The sadness about this story is that there is a palpable sense that these men knew little else and believed that it was their purpose, to be thieves gave them meaning and significance. It certainly gave them a tribe. There is a sequence when they are all recalling how they got into crime – invariably it was stealing food, which of course is indicative of their outlook and circumstances. Perhaps had this not been so, their lives may have been rather different.

Keep up with Technology

The film follows the frankly unbelievable ease with which the robbery was performed. Yet despite being a movie, this is the reality. Security systems at Hatton Gardens were woefully out of date much like the criminals who really failed to appreciate the power of CCTV, mobile phones and a Police Force that knows its stuff. Their open dialogue in public settings may be simply an overconfidence or a lapse of concentration, but surely desperately foolish.

The bickering, infighting and back-stabbing implied that honour amongst thieves is probably a very exaggerated claim. They all steal from each other and it is only when caught that they come together again to present some basic form of a united front. Who you select to work with is perhaps a key lesson, as indeed is having a well thought plan, that allows for interruption and frustration.

Given that the men pleaded guilty, but most of the money has never been recovered, the accuracy of the character portrayals is naturally questionable, perhaps for dramatic reasons, perhaps because the truth, when it comes to criminals, is as slippery as “Billy the Fish” the hapless fence, Billy Lincoln played by Michael Gambon. It would seem that only Brian Reader (Michael Caine) understood the value of diamonds and knew a gem from junk. Terry Perkins (Jim Broadbent) supposedly a great wing-man to Reader was little more than a bully (if the portrayal is fair) and Carl Wood (Paul Whitehouse) would seem to be an unwilling participant at worst. Danny Jones (Ray Winstone) was the sharpest operator, but seemed innumerate and failed to count the money and Kenny Collins (Tom Courtenay) seemed to spin a story to suit the listener.

The Police did a pretty impressive job, arresting Reader within 5 weeks of the crime. Before a year had passed the team was convicted and imprisoned. Crime does not pay… well perhaps it does, hardly any of the claimed £200m has been recovered, but as Reader warned, many of the deposits were held by other criminals. The truth may never be known. As for your investments and savings, who you trust and where you place your money is vital to understand. There are still many cases of financial fraud and theft. Would that it were not so.

Here is the trailer…