Skip to content
Gold and the ATM give away

The continued fall in the price of gold reminded me of a blog post that I wrote almost precisely 4 years ago (Gold to Go). This was a short piece about the arrival of an ATM that dispenses gold bars, rather small ones! in exchange for cash..

At the moment gold is at its lowest price in 5 years. The World Gold Council who recently issued their Q2 report, acknowledges the continued decline in the price of gold this year, but point to their belief that this is in part due to a possible increase in interest rates in the US.

Gold is really part of a defensive portfolio, not being cash, bonds or equities and an asset class that investors return to in times of uncertainty – or at least that tends to be the view based upon historical data.

I tend to take the view, from experience, that when investment advice is dispensed freely by those who clearly don’t have the qualifications to provide it, then there are serious signs of a bubble. An ATM dispensing gold at a shopping centre, placed their in July 2011… well the price of gold peaked in August 2011 $1,821 per oz. At the moment its around $1,093 per oz.

The price of gold soared from $431.65 per oz in July 2005, had a wobble from March 2008 until  September 2009 as it eventually broke through $1,000 per oz, climbing further until August 2011. The price has been in decline ever since and returning to the $1,000 per oz level, (no this is not a forecast) in part reflecting a higher degree of confidence in world economies. 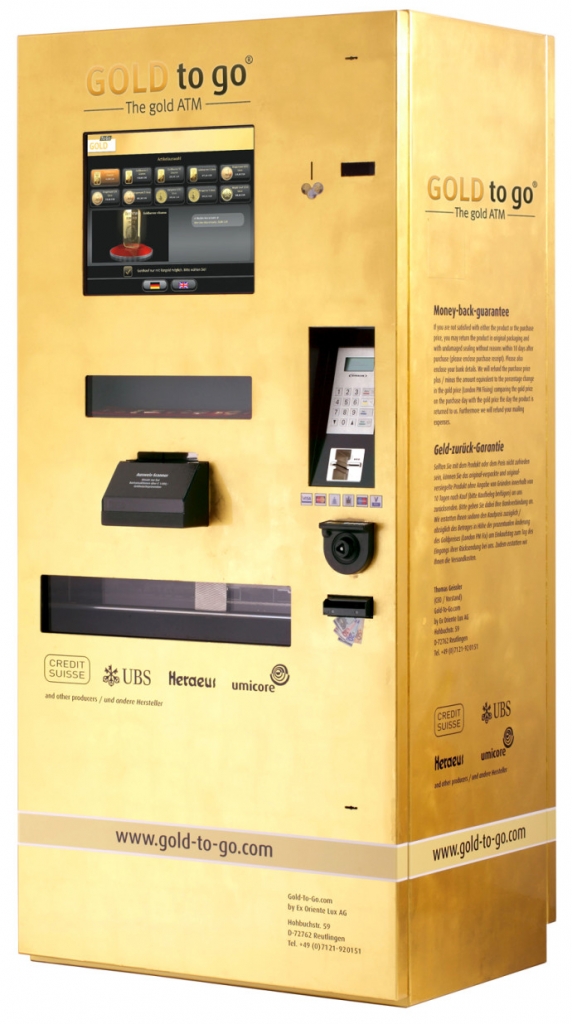 I’m not sure if the ATM is still at Westfield, but a quick online search suggests that there are a few in London, largely in International foreign Banks. Being a German machine (the Gold to Go one) it is incredibly reliable and prices are updated every 10 minutes, so the vending machine may easily provide you with a different price for your gold bar in-between coffee breaks.

Anyway, just so that you know, gold is fine as an element of a portfolio, but it really should not be too significant an element. Having all your investment in one asset class is very unwise – precisely why gold is one option of many. Here is the video of the Gold to Go ATM… please do not take this as advice to use the machine or indeed to buy gold, I am merely commenting on general principles and all investments ought to be made in consideration of your own context, plans, attitude to risk and capacity for loss.