One of the benefits of being in London is that there is a lot going on. As you probably know, I love the arts and so attending the London Sundance Film Festival is something that I now do when possible. On Friday evening I had the good fortune to see First Reformed, it was a special screening with Ethan Hawke, (who most will remember as Todd from 1989 Dead Poets Society) introducing and discussing the film by Paul Schrader who turns 72 in July and continues to make movies.

Schrader is a writer and Director, somewhat controversial with scripts from Taxi Driver, Obsession, Raging Bull, The Last Temptation of Christ and Mosquito Coast to name a few. This new film is a powerful story about a former soldier, now clergyman coming to terms with some very difficult truths within a complex world. 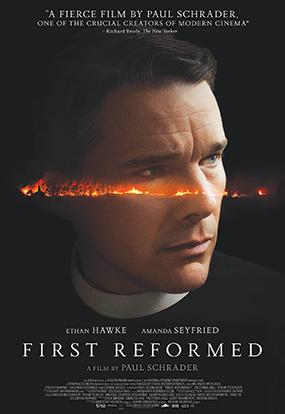 On the one hand it is a response to the feelings around the collective denial about the scale of the environmental problem that we all face. The story centres around May (Amanda Seyfried) and Michael (Philip Ettinger) who are expecting their first child. As environmental activists Michael despairs at the prospect of bringing a child into a doomed world. Toller (Ethan Hawke) provides counsel and comforts them as they struggle.

Toller has his own struggles, his own family military traditions resulted in him encouraging his own son to enlist, who was subsequently killed, resulting in his own marriage collapsing. This appears to have thrown him into church life and he is given a tiny, historic church with a congregation to match, in stark contrast to the business-like operation “Abundant Life” who have all the advantages that size brings in the form of resources but lack the one meaningful element of intimate connection.

The story explores ideas about authority, leadership and tradition set against a backdrop that requires much more thoughtful responses and integration of ethics. Money, greed and avoiding seeing what is discomforting all posed as the “proper” way. There are deep challenges to the American way of life within this film, as there are in Taxi Driver and other Schrader movies. A deep sense of injustice and a desperation to restore the balance of power reside at the heart of this dark tale.

We all have out blind spots. Sometimes these are helpful, they may even enable us to function. However, on occasion we must address difficult subjects and make some changes – hopefully, changes in our actions that are harming our own and only environment can be made in time to spare us from our folly. There are lots of reasons to he hopeful in life, but this movie reminds us of the challenge and perhaps a nagging feeling that there, but for the grace of God…

I did not like the ending at all. It was evidently written by a man, there is a bit when May, a heavily pregnant woman, finds a form of bliss in that awful Terrence Malick kind of way. I will not spoil it for you, but it didn’t work for me, the rest of the film was rather good until that last moment, but then, perhaps that is entirely the point. We all get to make choices each day about our behaviour – whether to recycle or to pollute. In a similar way, each day we get to choose, whether to plan for our future or ignore it yet again. Time waits for no one and ultimately, we will have to live with the consequences of our actions.

First Reformed is due to be released in the UK later this year. Here is the trailer and it may well be one of Hawke’s best to date.