Imagine a world where your wealth is sufficient for the rest of your life to fully support your lifestyle. Throw in the benefit of massive improvements to the environment and waste reduction and you have the plot summary of Alexander Payne’s new movie “Downsizing”.

This is a movie that is tipped for the OSCARS, given that it will be released in December in the US and January 2018 over here in the UK. Whilst having potential for perhaps both comedy and a sense of hope, this is a film that gets loses itself in a story that is both too big and too small. It’s a pity as the premise is pretty good and the trailer is typically engaging 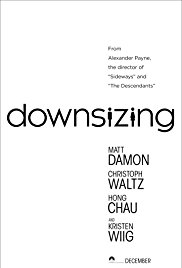 As a financial planner, my job is to help clients figure out how much is enough to support their lifestyle (as they determine it) for the remainder of their lives. Most people do not appear to have a financial plan, very few have a clear idea about how much would be enough.

Downsizing begins with the scientific discovery that means it is possible to shrink cells without harm or side effect to about 3% of their original size. The one problem being that it is an irreversible process and not available to anyone that has a body with additions (implants, prosthetics, pace-maker etc) as these will not shrink.

Paul Safranek (Matt Damon) is your average American, he was once on the path to a career in medicine, but his dreams were thwarted by an ill mother who needed his care. Now a somewhat frustrated physiotherapist, he is living in his late mother’s home, with wife Audrey (Kristen Wiig) and struggling to get by. At the perfectly imperfect setting of a school reunion, he is persuaded to consider Downsizing, the solution to his financial struggles.

Paul and Audrey head off to Leisure Land and receive a masterful sales pitch that extols merely the benefits of Downsizing, ignoring all of the drawbacks. The Safranek’s have assets of $52,000 but in the Downsized world this translates to $12.5million, to live on for life! The numbers do all the talking. Packing a delightful red keepsake box with their family treasures (wedding rings etc) the same box is delivered to the house in Leisure Land, but of course gold wedding rings now appear the size of buoyancy rings. I have to admit, that if I could arrange such a return for our clients I’d be winning every award under the sun. However, as with all things, there are no guarantees.

The plan to save the world is to gradually miniaturise everyone over the course of 200 years. Despite a safe procedure (assuming removal of fillings etc) there are very real side effects in the larger world – economic, political and social. Its all very well that a mansion may now only require the space of a dining table, but property in the larger world still needs to be sold and therefore bought. Taxes need to be paid, production needs to continue and there is a debate about whether the Lilliputians should have a full-sized vote.

The film attempts a stab at all these issues as well as a rather fruitless assessment of a life of pleasure, the poverty divide, immigration and those that remain outside the system, where standards are never the same. Add a touch of impending environmental disaster and the naive, blancmange-like character of Paul Safranek who seems to lack either any sense of self-determination or self-awareness, chasing every ball thrown by anyone willing to bother. Ironically, all of the issues are far too big for the film which becomes as microscopic as its characters, lost in a world of complexity. It’s a pity. Much like Safranek, it appears nobody asked what it was that Alexander Payne wanted from this. Instead it’s a journey of happenstance, rather than any course being plotted. I suppose that this is the reality for most people, who live from day to day, month to month, year to year without any deeper sense of direction, like Safranek, frustrated through not identifying purpose. Nobody asks the right questions and so the thinking is as shrunken as the inhabitants of Leisure Land.

Here’s the trailer, the film is released in the UK in January (following its showing at the London Film Festival this month). Oh yes, the trailer is the best bit.