There’s a new old play in town. Don Juan in Soho. New in the sense that it is essentially an update on Moliere’s “Dom Juan” and “Don Giovanni” making ample references to the opera by Mozart including the Commendatore. Yet despite many quintessential English traits,  “Johnny in Soho” doesn’t really capture the imagination quite as well.

This is of course a morality tale and how Don Juan (played by David Tennant) eventually receives his dues.  I presume that a spoiler alert on a rather old story is unnecessary. His faithful servant Leporello, (now renamed Stan, and played by Adrian Scarborough) bears witness to a life of womanizing on a par only rivaled by, well… Casanova… perhaps! Despite being the time of Tinder, it is hard to conceive how many have been so taken in by so few. Indeed whilst the material may differ, a glance around the political world might lead one to conclude that the those that “seduce” or manipulate and deceive are some distance from the gaze of the Commendatore. 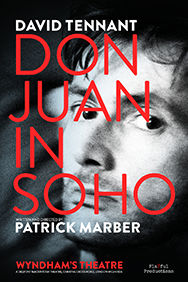 In reality this new play that first aired over 10 years ago in 2006 at the Donmar. The main difference with Don Giovanni is that, here, Patrick Marber attempts to pose Don Juan as definitively honest. He doesn’t hold him out as a liar, but a man who understands who he is and what he wants, making no apology for his choices and the havoc that befalls his victims.

It made me wonder how many Don Juan’s I may have met without realizing and then it occurred to me that smart suits, seductive smiles and self-interested manipulation have been the reason why the industry in which I work has a problem with trust, given the catalogued experiences.

It is with a great deal of frustration that I continue to come across further evidence that the financial services industry continues to attract the Don Juan’s of our time. These offer alluring promises of guarantees, high returns or some hair-brained way to avoid tax… assailing their victims with the tone of certainty, a whiff of greed, a lethal concoction of jargon and the paralyzing drug of fear. The result is predictably similar for Don Juan, absconding so promptly that he rarely witnesses the real results of his “charms”. Sadly, few seem to be caught by either the regulator or the Police as they disappear into the filing cabinet of “hard to catch”.

The performances of David Tennant, Adrian Scarborough and Gawn Grainger are likely to bring many to their feet, yet the characters they reveal are pretty despicable. In the real world, where life savings are lost to the unscrupulous, the feelings towards them are of course rather different.  Indeed, more murderous feelings are evoked, much like those evoked in Aloysius as his family is “ruined”.

If you get along to the play, be warned of its adult content. It runs at Wyndham’s Theatre until 10th June 2017. Click here for ticket information.