I have to admit to being a little uncertain about the title of this film in 2018 and frankly the film itself did little to convince me that it didn’t fit. Yes this is a story about rich Asians, but not what I would describe a crazy. For certain, there are many examples of a dysfunctional family, but no more than most families.

The film has taken the US “by storm” with box office receipts there already more than $120m. This is a love story, a “rom-com” though the jokes were not exactly coming thick and fast. The point of difference is that this is an Asian cast making a film about “normal” Asians that do not fall into the typical stereotypes that we have become accustomed to seeing in the West. At the BFI preview last week, the international cast were very keen to make the point that for them, this was a significant film about their identity, shown in a positive light. Representation within a mass market is something that male white westerners like me will never really fully appreciate because “we” make up the vast majority of the market. I am not going to disagree. However, stereotypes in film are shorthand to make a story move along. 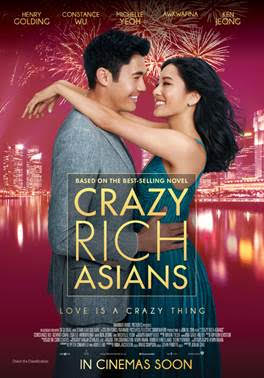 I enjoyed the film for its entertainment but cannot in all honesty say that it is particularly good or revolutionary (other than representation). The plot is that of most basic fairy tales with the “rags to riches” heroine confronted by those that wish to preserve and prevent her access to a “higher social class” typically taking the form of the wicked step-mother, here it is simply mother (Michelle Yeoh) and grandmother (Ah Ma). Hardly revolutionary! The males are essentially invisible, due to workaholic lifestyles that keep them away from their families, those that are not already dispatched to British Boarding Schools. Yet this, we are supposed to believe is what Nick Young (Henry Golding) is conflicted by, his love for his Cinderella, Rachel Chu (a US University economics professor) or running the Young family empire in Singapore. Rachel (Constance Wu) is oblivious to the Young family fortune, arriving in Singapore to meet Nick’s mother, more concerned about the US and Singapore cultural differences than any financial ones. Thus, dramatic tension is formed… and the feeling that you have seen this before.

The story unfolds as the couple arrive in Singapore to attend the wedding of Nick’s best friend (hereto unmentioned) Colin and his fiancée Araminta. Through the nuptial preparations Rachel faces backstabbing, envy and malice primarily from those that believe that she has usurped them on their own gold-digging quests. Like the proverbial fish out of water, she seems to forget all the skills that make her a professor of economics at a New York University….

Show Me The Money

I had wondered where issues about money might arise. Perhaps we would learn some deep secret about family, tradition or cultural wisdom that would offer a pithy alternative to the excessive consumerism. Sadly, there was little evidence that Asians are any better at handling wealth than anyone else, no great pearls of wisdom, no Eastern enchantment or sophisticated puzzle to solve.

There are small nods to a sense of inadequacy for the have-nots and a very minor sense of embarrassment for the “haves” the examples provided are forms of excessive spending. Everything is big and done to impress for the Instagram world – no different from anywhere else. Nothing unique at all. There are some tacky and tasteless homes, but no different from that chap that has a Tower. The excessive parties are simply that, self-indulgent and really rather daft. I don’t think I’d call it “crazy” I’d probably describe it as thought-less. That said, this is aimed at Americans, where any word is used to mean “very”. Very Rich Asians would be a more appropriate title, though in fairness, “Some Very Rich People in Singapore” doesn’t have the same marketing slickness to it.

Here is the trailer, the film is on general release from 14 September 2018.