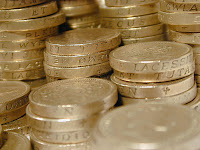 The FSCS (Financial Services Compensation Scheme) has announced that the industry (which includes IFAs) will be asked to stump up £406m as their initial contribution towards the cost of bank defaults in 2008. The key word being initial. The FSCS paid claims of nearly £21bn from October 2008 until March 2009, this compares to a total of £1bn paid in claims since the scheme was set up in 2001.

Santander, one of the few Banks to be relatively unscathed from the credit crunch recently announced half-year profits of £790m, an increase of around 41%. The Bank recently “acquired” Abbey, Alliance & Leicester and Bradford & Bingley. The theme seems to be an alphabetical collection of UK Banks… next beginning with the letter C?

Barclays meanwhile have announced an increase in profits of around 8% for the first half of 2009 to £2.98bn. It is also interesting to note that they have increased their number of mortgage accounts by around 40,000. HSBC announced half-year profits of £2.98bn, largely due to the growing profitability of its Investment Banking operations. It remains the 3rd largest Bank in the world. Northern Rock on the other hand, continue to push borrowers away once a fixed or discounted rate mortgage has come to a natural end. The result being a reported loss of £724m, compared to a smaller loss for the same period last year of £585m. However, there are indications that the UK taxpayer is being repaid as the level of indebtedness to the Government reduced to £8.9bn. RBS announced profits of £15m, which are of course tiny in comparison to the other banks, the vast majority of profit was also generated from Investment Banking activities with high street style banking services continuing to suffer. Lloyds announced a £4bn loss, most of which it claimed was the result of taking over HBOS (Halifax Bank of Scotland).

So what does all this mean? In short the Banks continue to struggle; most of the good news generated by them is a result of Investment Bank activities. The high street banking sector remains in the doldrums. This is the part of Banking that most of us are familiar with. In practice, small businesses continue to struggle, High street banks are very reluctant to lend or even retain current levels of commercial and consumer borrowing. Their own continued pressure is likely to be passed to branch and regional managers who will be closely monitoring credit arrangements. So be warned.