Skip to content
Back to the classroom – Strikes, Teachers and the uncomfortable maths 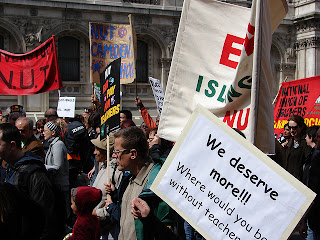 Teachers that are members of the “old style” pension (before 2007) currently build up a pension at a rate of 1/80th for every year of full-time employment until the age of 60. The typical teacher graduates and becomes a teacher at the age of 22. The typical starting salary is £18,000. If we assume no promotions or management responsibilities and no career breaks due to children (which is a lifestyle choice) then retirement at age 60 is likely to lead to 38 years (60-22) of service. Retiring early tends to prolong life expectancy, it is certainly possible that this person could live to age 90 (30 years in retirement).
If we make the assumption that salaries for teachers rise at 2.5% a year on average over the 38 years. A starting salary of £18,000 becomes £46,000 at age 60 (the final salary) -which for the record means £1.1m gross income has been earned. I know that salary rises at present are low or below this, but this is a reasonable assumption over 38 years.
Here is the maths:
38/80 x £46,000 = £21,850 per annum + index-linking (inflation each year).
There is a also a tax free lump sum of 3 times this amount = £65,550 in this example.
If the teacher lives to 90 (another 30 years) and inflation were to rise at 2.5% on average over 30 years, then the £21,850 pension has become £45,832 at age 90. If the teacher died before this whilst retired, whatever pension they were getting would halve and pay their spouse for the remainder or his or her life. So at worst case the spouse would receive £10,925 a year, at best (in this example £22,916 a year). The rate of increase to the pension in retirement has been part of the current falling out – whether the link is to RPI (as it was) or the change to CPI (which is the proposal).  Any assumptions about the differences between the two over the long term will have an impact, but it is frankly pretty difficult to determine which will actually be higher. We will only know when we get there (each year).
Teachers contribute 6.4% of their salary towards the pension. So a salary of £18,000 this is £96 a month. This does attract tax relief at least at basic rate relief (so is really £76.80 net a month).
Using our example, over 38 years 6.4% of salary would amount to a gross outlay of £72,503 over the 38 years. In practice due to basic rate tax relief this would really be £58,002.40.
Annuity rates today providing a pension for a 60 year old that is inflation-linked and also provides a 50% spouses pension are approximately 4% perhaps lower. So in order to achieve an initial income of £21,850 the pension fund would need to be £546,250 and this does not include any lump sum (which in the example is another £58,002 or 10%). 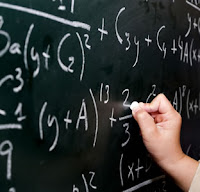 By way of a fair comparison, we need a target fund of £600,252 (£546,250+£58,002) over 38 years contributing £96 a month and increasing this by 2.5% each year. This would mean that an after charges growth rate of 10.21% per annum would need to be achieved. This is highly unlikely to occur, half of this return (5% after charges) is more probable, but still not certain as the pension is investment based.
If we assumed a 5% return each year after charges, then you would need to invest £314.47 a month, rising by 2.5% a year for 38 years to achieve a fund of £600,332. This is a gross (before tax relief) outlay of £237,449. This is rather more than the Teacher contributing a total of £72,503 gross. The mathematicians amongst you will be thinking, hang on if this is roughly half the return (5% instead of 10%) why is the cost 3.27 times as much? Well that is the power of compounding returns. A maths teacher would have taught you that this is called compound interest.
Sadly, because most people do not get decent financial advice, they do not start paying into a pension early enough, or paying enough (note that for a 22 year old on £18,000, £314.47 a month (£3,772.64 a year initially) which is a whopping 20.96% of salary. Teachers are automatically enrolled into the Teachers Pension Scheme (good advice). The amount that they contribute is a fixed percentage of their salary (also helpful advice). Importantly they start in the pension as soon as they have a teaching job (at a young age).
Starting your planning is vital. To achieve the same fund with 10 fewer years (starting the pension at age 32) would require a £626.08 investment each month, increasing by 2.5% a year for 28 years growing at 5% after all charges. This would see the target fund of £600,332 achieved but at a gross cost of £302,879. So a 10 year delay costs an extra £65,430. The matter of whether someone can afford £626.08 a month at age 32, given the likely extra financial responsibilities that they have is a significant point.
This is essentially the problem for the members of such schemes and their employers. The cost is unsustainable and significantly out of line with the private sector. It is the same for any of the main State employers. The other problem is that even though both employee and employer contribute towards the pension, this money is not really used for future provision. Most of these schemes are funded from the general public purse, the contributions by employee and employer are largely little more than a joining fee for the guarantees provided. Sadly this is an issue that has been ignored for far too long and as we have seen the cost of delay merely adds to the cost.
I have sympathy for anyone that is caught in this problem, but unless the public finances are re-arranged in other areas, then there are few realistic alternatives. Some of the schemes have altered, for example some pay more (doctors earning a certain level of income will pay 8.5%). Sometimes the scheme has been closed to new staff and they are in the money purchase scheme instead. Some are in a 1/60th scheme rather than a 1/80th scheme (38 years in a 1/60th scheme is a pension of 63.33%). Some have had the definition of Final Salary altered, to be a career average or average of last 10 or 3 years, but taking the higher “number” of whatever definition has been agreed.
This is not a political point. I am drawing attention to the reality of maths. There are different salary levels and of course, promotions with increased salary improve the pension. Some people are single, so do not benefit from a 50% spouses pension. Some will die before they reach retirement, some will die within a few years of retirement. Working longer means delaying payment of a pension, but it also means increasing the number of years of service and salaries will also be increasing.
These sort of final salary schemes are very valuable, giving up such benefits is going to be painful, but nothing like as painful as not having a pension at all.
The painful and disappointing reality is that the maths cannot be ignored any longer. According the the Teachers Pension Scheme, they currently have over 1.4m pension scheme members, which of a population at around 60m is 2.3% of the population. This is just the Teachers Pension. The NHS Pension Scheme is larger.
We are a boutique firm of financial planners. We create financial plans designed to achieve a desired lifestyle. We will craft and implement your plan that will provide you with the greatest chance of accomplishing your unique goals based upon the values that you hold. Financial products are little more than the tools to achieve your required results
Call us today or visit our website for more information and to arrange a meeting