Skip to content
Pensions: Are you an Equitable Life policyholder?

Are you an Equitable Life policyholder? 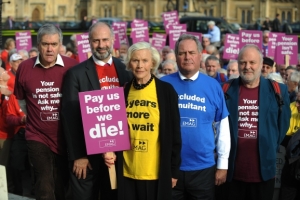 One of the larger financial messes in the last 20 years has been the failure of Equitable Life. This was a company that essentially said they didn’t deal with “middlemen” (meaning IFAs) which in practice enabled them to also say that they did not pay commission to independent financial advisers, so despite being nothing more than a product manufacturer, managed to persuade many people that this was somehow better than an IFA being able to select from the entire market and select an appropriate arrangement. As a mutual society, they could also claim not to have shareholders (who require returns). Of course in practice, like any organisation, mutual or Plc, they have operating costs – their staff and advisers who sold, sorry “arranged” policies.  It was evident to some in the mid-1990’s that Equitable simply wasn’t a sustainable business. As you may imagine there were not many IFAs that couldn’t control the sniggers once Equitable was forced to close to new business in December 2000. As yet I haven’t met a single adviser that doesn’t believe that the demise of Equitable Life has had a significant impact on the degree of mistrust of financial institutions. This seems to have been compounded by the delays in appropriate compensation to policyholders. Despite failure, the company survives to service its estimated 500,000 policyholders with around £8bn of funds being managed (Equitable has been around for 253 years).

However the demise was nothing to do with product charges, commission (or lack of it). In practice it was triggered by failing to keep a simple but expensive promise of guaranteed annuity rates, on which it reneged and was subsequently brought to book, which then resulted in the collapse as the annuity rates were rather  more than “over generous” at the time. Anyway, long sad story short, the time to apply for compensation due to the “government maladministration which ocurred in the the regulation of Equitable Life” which was established  in 2010 is drawing to a close. Despite paying very large sums, there are still many people that haven’t claimed and should do so as a matter of priority. This is relevant to people that bought policies between 1992 and the end of 2000 when Equitable closed. Call the helpline on 0300 0200 150 and checkout the supporting website. Also dont forget the EMAG site as well.

Looking at old Equitable adverts now is a reminder that assurances about the future were somewhat misplaced. Saying something with confidence does not make it true. Even this 1998 advert with Buzz Aldrin suggests that retirement activities might include a space trip by 2028… well who knows, but certainly the belief that you can get something for nothing is definitely thinking from a different planet and those policyholders that have not yet had compensation, probably feel that their pension shouldn’t really be rocket science, but something much more down to earth.