The trailer to this movie gave me the impression that it was a fairly typical heist story, but with children dressed as old men. In reality this is a really rather wonderful story, but unfortunately displays the insight lacking from many of those involved.

The opening credits quickly open your eyes to the very real encounter that you are about to witness, followed by the introduction of the characters concerned. This is indeed a true story of four young University students who yearn for something more than the mediocrity of their circumstances. We are introduced to various people, who all fail to see beyond the external world that these young men offered and projected. Parents left wondering rather desperately why their sons could ever make such decisions. This is Ferris Bueller on speed.

This is the perfect conversation starter for those that do not sit well with the suggestion that everyone is special and cuts deep into the delusion of the American Dream. A slumber from which many may never wake and one whose end is denoted by a President signalling its end yet rather ironically perpetuating the delusion that its failure can somehow be resurrected, having to make America Great Again. The problem with any dream is that at some point you have to wake up and face reality. I’m not against dreaming – quite the opposite in fact, we need to dream, but we also need to plan and act, not simply wish. If you have children that are about to head off to University, spare a thought for this collection of A-graders. Young men who have “made it” to the promised land of a good University, doing a good course that provides good prospects. 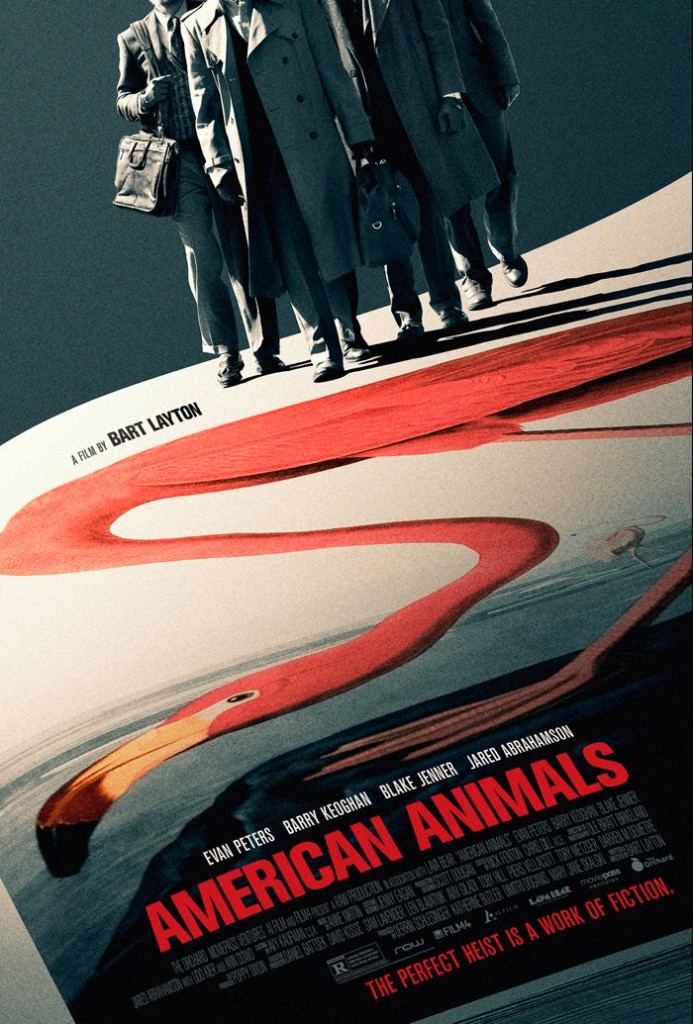 Whilst on the campus library tour, art student Spencer Reinhard (Barry Keoghan) is taken with a rare book of 435 paintings “Birds of America” by John James Audubon. The fact that it is both beautiful and valuable, yet displayed so humbly in the library provides a nagging thought and an opportunity.

He relays his discovery to his friend, athlete Warren Lipka (Evan Peters) who is certainly one of those friends that never has “parental permission” which is perhaps precisely why Reinhard befriends him. Lipka becomes fascinated with the idea of stealing the book, being that it is so valuable and so minimally guarded. All that stands in their way is a good plan, a librarian and a single locked door.

At one point in the film Warren Lipka says “You’re taught your entire life that what you do matters and that you’re special. And that, there are things you can point towards that would… which’ll show that you’re special, that show you’re different, when, in all reality, those things… don’t matter. And you’re not special.” This was his opportunity to “live”, not to get rich quick, but to feel the adrenaline of being alive in a world that to that point had been scheduled point, by point, event by event, stage by stage.

Their plan continues to meet no insurmountable obstacle, so whilst expecting it to be derailed by something that they simply could not overcome, they creep ever closer to the realisation that a well-designed and executed plan reaches its stated goal. Their inevitable downfall was only due to a lack of detail in their plan, not that it was a bad one. This is of course (finally!) my moment to mention that a financial plan is best crafted by someone that understands the requirements, the detail and can help you to verbalise and clarify your goal, one that is hopefully based upon your values, not simply acquired value. The “Why?” of your plan is just as important as the plan itself.

There is little doubt that for Reinhard, Lipka, Borsuk and Allen, this experience was probably one of the most heightened and significant of their lives. It is what they will be remembered for by those that do not know them. It may even be only how they remember each other. What is certain, is their remorse, but had they actually had a better plan, perhaps things would have been rather different. Obviously, I am not condoning theft, merely that a plan for the life you want may taste bitter unless you check the detail and implement it as outlined. How is your “What If?”

Here is the trailer for the film which is on general release from 7 September 2018.