A Star Is Born

The latest reworking of A Star Is Born is currently showing in cinemas. The tale is familiar partly because it is simply a remake and partly because this is familiar Hollywood ground. It is difficult to not be cynical about the simple commercialism of this remake, directed by and starring Bradley Cooper and muse de jour Lady Gaga. These two are already global stars in their respective fields, so there was always a high chance of ker-ching at the box office.

There is nothing terribly wrong with the film. I had low expectations and so was relieved that it wasn’t as bad as I feared. Cooper is good as an actor, though heavy handed in direction and at 2 hours 15 it is about 45 minutes too long. If he is to repeat this role, he needs to learn the art of editing. Despite the screen time characterisation is thin – which is probably being kind. Certainly, this is yet another story about an alcoholic with money. The temporary relief of a woman to love and inspire him to better behaviour is insufficient. 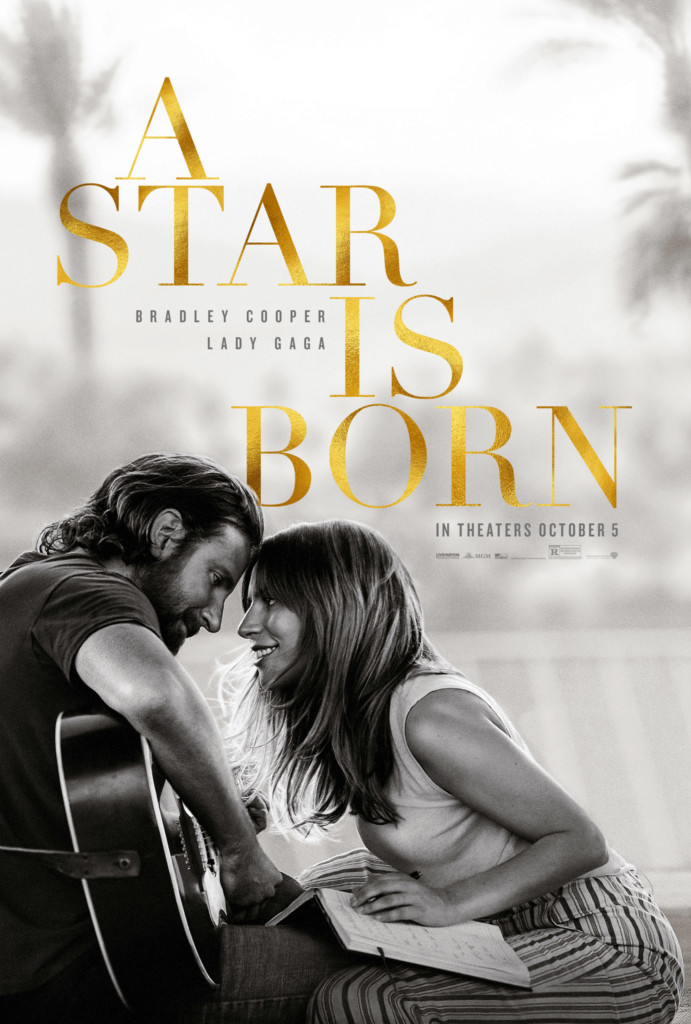 Lady Gaga can certainly sing and this element of her performance is powerful. Watching her however, you were always conscious that this is Lady Gaga – which is not the purpose of film. Jackson Maine (Cooper) is towards the end of his country music career (really?) and drunkenly happens upon Ally (Gaga) who is performing at a drag club after her shift as a waitress. The only female to do so. He is enthralled and within 24 hours has written a song for her which they perform as a duet without any rehearsal. This from a man that is apparently nearly deaf and mainly drunk.

A video of this new encounter goes viral and Ally is immediately touring the world with Jack, from Arizona to Glastonbury. The depth and soulfulness of Ally’s songs is her appeal, yet a new English manager (Rafi Gavron) presumably a shade of Cowell, basically shapes her into a pop-tastic dancing pop-ster much like Gaga herself. The supposedly feisty Ally complies without any significant artistic difference. An almost out of body performance on Saturday Night Live which is really Gaga being Gaga. Yet this is nothing like the Ally we were all quite blown away by. Inconsistency aside, her success immediately casts Jack into the shadows where he swiftly finds substances to abuse.

The story could have moved in various directions but failed to explore the backstory of the main characters. There is no help other than the usual Betty Ford type clinic, yet nothing to get under the skin of why. We are told that alcoholism is a disease. It isn’t, it’s simply yet another way of coping with trauma.  The Hollywood problem is really one where nobody has the courage to say “no”.

Are We There Yet?

Admittedly, the story is meant to be partly about ambition, but the Vegas style marriage of a bad idea holds little to convince an audience that this is a deep connection, more one of convenience. We know and probably don’t care that much if Ally and Jack are just another 3-minute track on the playlist of life. The timeframe of the story shifts along at the pace of someone trying to fit in filming between pop tours, yet drags with the numbness of a long-haul coach ride.

We learn nothing new about fame, fortune, alcoholism or ambition, but there’s a soundtrack in it.