Perhaps Three Billboards Outside Ebbing Missouri is the ultimate signposting movie ever made. It certainly doesn’t do much to alter any preconceptions about certain segments of American society, however it is a work a fiction, albeit with an alarming gritty realism. However, despite the gasps of shock within the audience at some utterly backwards attitudes. The most striking aspect about this film for me was the lack of any action.

In the film various characters are assaulted, verbally and physically, yet witnesses basically remain as bystanders, doing absolutely nothing, apart perhaps, from a disapproving “tut”. I comfort myself that this is fictional, it’s a movie, people don’t’ stand and gawp, doing nothing… do they? I mean I know we are all able to witness terrible scenes from around the world in a voyeuristic sense, but we aren’t right there on the spot, we are unable to immediately intervene… but if that happened within our own home, street or park, we would intervene right? To me, the lack of engagement or outrage was worse to witness than the racism or violence itself. 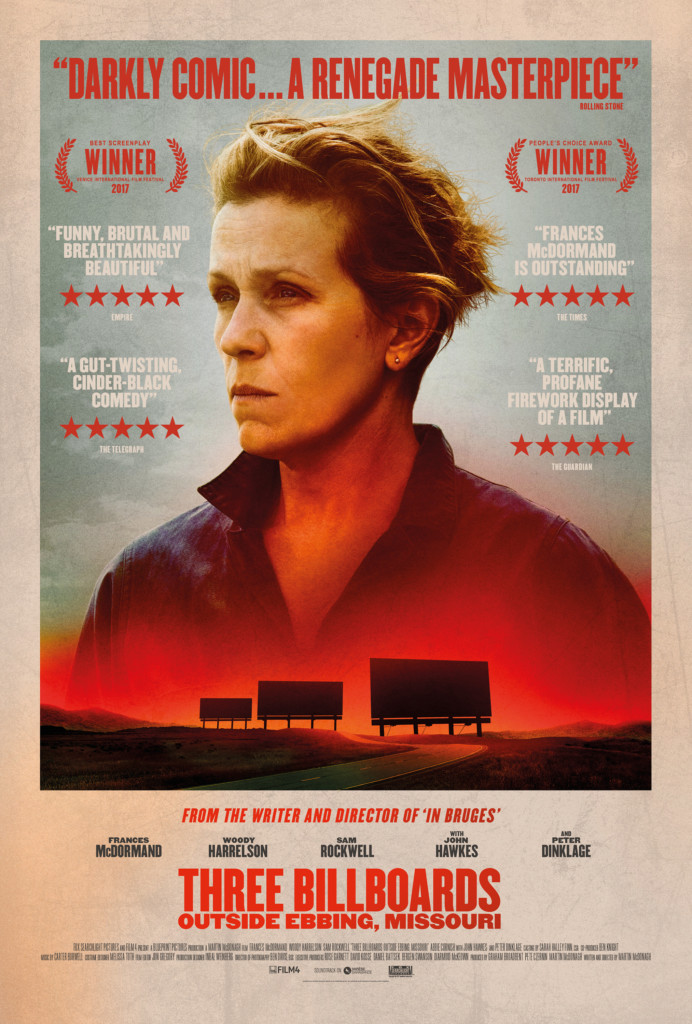 It is surely our involvement and engagement, that provide us with a sense of our humanity. This was demonstrated in a CCTV clip that I saw this week of a person saving the life of a man about to throw himself in front of a train. Many do care and do get involved, but some seem to be happy to be mere bystanders in life. Maybe this is what the Director intended, given the politics of the day, perhaps this is a commentary on those that make claims about a President and turn a blind eye, frequently, to the continuous blatant hypocrisy. The movie certainly has the title and whiff of a “based on true events” tale. In short, I guess they could be, which is deeply worrying. Indeed, the very premise of the story is around the lack of action by the local police.

This is Hollywood, not Missouri… right?

As for the film itself, there are two very strong performances. The lead character Mildred (Frances McDormand 60) gives a very “real” depth to the characterisation and Sam Rockwell (49) nails his performance of Dixon, the cop you hope to never meet. There are some notable choices for the cast, Abbie Cornish (35) plays the wife of Police Chief Willoughby, (Woody Harrelson 56) she was 3 when he started his role in the bar sitcom “Cheers”. The white middle-aged men are hopefully too clichéd with Mildred’s former husband (wife/probably anyone-beating) Charlie, (John Hawkes 58) now with Penelope, (Samara Weaving 25) a woman considerably younger and more the age of their murdered daughter Angela (Kathryn Newton 20). Perhaps this too is deliberate characterisation of men unable to cope with ageing.

One of the talking points of the movie will likely be the actions of the Police Chief Willoughby, who takes a view on terminal illness and sets his mind to dealing with loose ends. His words to Dixon and the subsequent events seem unlikely and have caused controversy in various circles. However plausible, clearly each character is responding differently to stress, turning to their known and learned patterns from some rather poor parenting, at least that is what I assume it is.

How we respond to stress when it arrives is hard to predict. However much we plan or prepare, the reality can be different. Life can provide us with unrelenting strain, serious illness, financial ruin, loss of a loved one – much of our ability to control these things is as fictional as the movies. Yet, we can plan, doing so in our more thoughtful moments, so that we can fall back on who we are, not what our surging biology deems us to be in the crucible of the furnace. It is easy to put off difficult things in life, we may get warning signs – even billboards, but sometimes even three at once isn’t enough in this modern twist on “don’t kill the messenger”.

So here I am…. have you got your stuff together?

Here’s the official trailer, the movie is tipped to do well in the award season, partly because it seems to reflect the moment in America today. Oh… and the language is certainly….. colourful.