A Case of Cops and Robbers?

A Case of Cops and Robbers?

There is an undeniable strange fascination with a story about bank robbery. Butch Cassidy and the Sundance Kid, The Great Train Robbery, The Italian Job, Bank Job, The Lavender Hill Mob, to name just a few. Perhaps there is something played out in the story that we might wish we could do, yet clearly do not. Perhaps the daring, cunning or planned deception appeals. Perhaps we admire something about “sticking it to the man” which in this instance is the large, faceless, corporate Banks, who we might tend to believe are the real robbers (anyone think their bank charges are fair?). This is of course nothing but escapism, a reality that thankfully we do not have to live with personally.

The new movie Baby Driver is on many levels another heist movie, a car chase, a gang and the inevitable show-down. Throw in a small romance and the ingredients are set another summer blockbuster. However, with the British Director Edgar Wright at the helm, who made comedy such as “Hot Fuzz”, “Shaun of the Dead” and there is arguably a more subtle nuance to the plot. 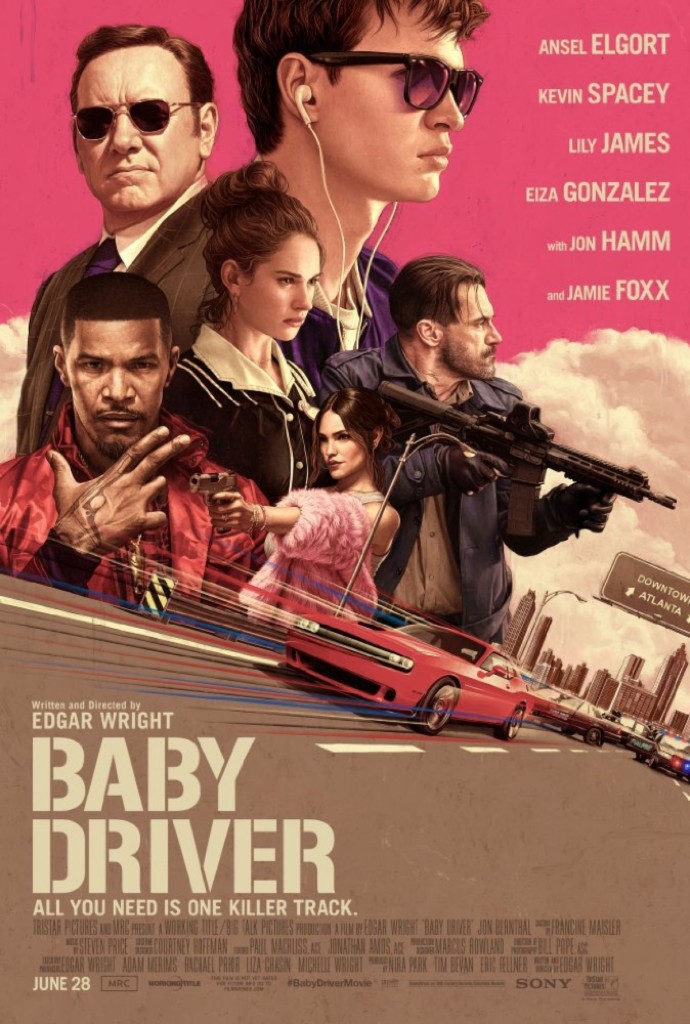 In the days of computer games like Grand Theft Auto where players can commit all manner of crimes in the “safety” of a game without consequence, there are many that might ask questions about the impact on the player. Baby Driver attempts to draw from this conversation and whilst the first heist is very much like a clean version of a game of no consequence, each subsequent event gathers the reality of pain, suffering and ultimately the reality of loss. That said, I’m not too convinced that guns and violence are still not stylized and glorified within the film, there is still not enough consequence, but perhaps I am a little numb to violence within films.

Are you Being Served?

Consequences are of course something of a hot topic. Whatever your political views, the devastating fire at Grenfell Tower has triggered some significant discussion about the consequences of a divided society, divided on the grounds of have and have not. We have heard allegations about money being the motivation for almost every shortcut. Indeed the £1bn deal that Mrs May has struck with the DUP to many is an act of bribery and of course many now make the case that austerity has not worked and must cease, a policy that was the consequence of the financial collapse and the subsequent propping up of the system, which largely went to the balance sheets of the very Banks that created and manipulated the chaos. So we are back to robbing banks because of the belief that the banks are the bigger villains.

The UK regulator (the FCA) has today issued a paper on how they would like to reform the investment banking community (like those that you probably see on billboards or sponsored events). Many have very high charges, most of which appear to be somewhat difficult to justify based upon performance. Indeed advisers such as myself that use evidence based investing as the basis for wealth management, combined with low cost techniques, have been calling for reform for quite some time. However, there is also the issue of extra charges and the regulator would like to see one all-inclusive charge. I don’t have a problem with the sentiment, however invariably complex problems are rarely easily solved with a simple answer. There always needs to be a context. None of us would actually rob a bank, let alone approve of it, our motivations for watching and loving such stories are clearly more complex.

The Good, The Bad and The Ugly?

Life would be pretty easy if the lines of “good” and “bad” were so easy to define, arguably the biggest flaw of all religions. Most Politicians seem yet to learn that most ideology is bereft of complex thought for the reality of life. The polarization of opinion is decidedly unhelpful. There are no magic money trees, but there are obviously ways to create money and to grow it. Taxing the rich is all well and good if you don’t drive them away. Keeping the poor in miserable conditions, where they feel powerless, unrepresented and ignored will eventually lead to inevitable calls to take power. Squeezing the middle classes until they feel bled dry whilst we celebrate and reward psychopathic bullies, be they CEOs or Heads of State (or party) isn’t going to help to establish a sense of fairness either. We live in complex times (as we always have). There are very few easy solutions to our complex problems.

We in turn, escape to the sun, the country, the movies, our mobile devices and use stories to tell ourselves that good will triumph, that injustice will be exposed and punished. There is presumably a place between Utopia and Dystopia that most of us manage to call home, where we really live our lives that are full of complexity and a healthy degree of compromise.

As the Brexit negotiations are under way, we are certainly going to need to compromise. Posturing the EU as pure evil or pure heaven, will not help our understanding of the complex. I expect nothing other than unhelpful reporting from most of the media and social media, yet we must sift through it to garner the occasional nugget of wisdom. To pretend that feelings will not be hurt or damaged seems somewhat naïve, indeed even Bats, a character from Baby Driver says:

Anyway, here is the trailer.