It sounds an easy question, but right now it is a moving target. If you answered 65, you are wrong because that stopped being the State Pension Age (SPA) last December. Until 6 October 2020 SPA is in a transitional period where there is no specific age, just a set of dates, each separated by two months, on which it arrives, depending upon date of birth. So, for example, if you were born between 6 February 1954 and 5 March 1954, you reach your SPA on 6 July 2019. From 6 October 2020 until 5 April 2026, SPA will remain at 66, before starting another two-year transitional period, en route to 67. To provide an example… John Travolta was born 18 February 1954. You will remember him as a 20 year-old Danny Zuko in the 1978 movie “Grease” (about the summer of ’58). He played opposite Olivia Newton-John, who is now 70.

And the result is… 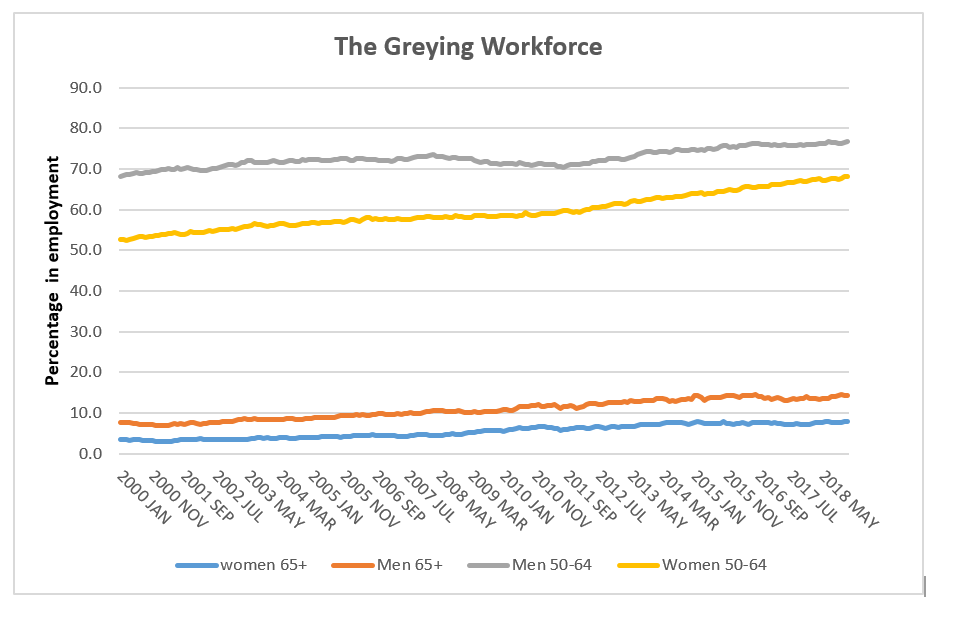 The SPA has been on the rise since 2010, when the process of equalising state pension ages for men and women began. The effect of that controversial reform can already be seen in UK labour market statistics. In April 2010, at the start of the equalisation process, 58.5% of women aged between 50 and 64 were in the work. By January 2019 that proportion had risen to 68.1% – an increase of almost a sixth. As the graph shows, in that age band there are still proportionately more men in work, but the gap between the sexes has been narrowing since 2010.

The trend of increased working life extends beyond age 65, as the two lower lines on the graph indicate. In January 2019, 7.9% of women aged 65 and over were still working, as were 14.2% of men. Many of the jobs involved are part-time.

The rise in SPA is not the only driver to the changing age profile of the workforce. Legislation that largely prohibits mandatory retirement ages has made it easier for employees to keep in harness. Tight labour markets – UK unemployment is under 4% – has encouraged employers to hang on to staff, on a full or part-time basis, rather than compete for new employees.

Probably the main reason for the growing grey-haired workforce is a financial one: they need the earnings. The state pension (theoretically £168.60 a week in 2019/20) hardly offers a comfortable retirement. Another factor is the gradual demise of final salary pension schemes, which most private sector employers have now closed to existing employees as well as new recruits. Such schemes often made it easier to take early retirement, especially if the employer added redundancy incentives. Workplace pension ages have also been rising too, often tracking the move in SPA.

When you retire should be a decision you make, not a timing effectively set by the state or financial pressure. The only way to have that freedom of choice is to build up sufficient resources before you retire, by way of pensions and/or other investments