There are some that believe that life is rather like a circle, on a continual loop – particularly when the same “lessons” keep showing up. I’m more of the view that it is more like a spiral, hopefully, we have learned something and face moments differently, a little wiser. The new movie Hacksaw Ridge has much that is very familiar. In many ways it is another WWII movie that reminds us of the sacrifices and cost paid (in bloody lives) and is pertinent for the coming Remembrance services this November.

Then there is the not so insignificant point that this is a film by Mel Gibson, a man whose fall from grace has been spectacular, from the heights of Hollywood success with the Lethal Weapon series and Oscar winning Braveheart (1995) to arrest and ranting at Police (2006). A catholic man of 60 expecting his ninth child but from his third partner, 26-year-old Rosalind Ross – who was 4 when Braveheart was released, (and known for his struggle with alcoholism) it is hard to ignore the continual struggles that he has, which perhaps he attempts to expose and work-through within his craft be it The Passion of the Christ or this latest film “Hacksaw Ridge”, which has the familiarity of both Gallipoli (1981) and We Were Soldiers (2002). 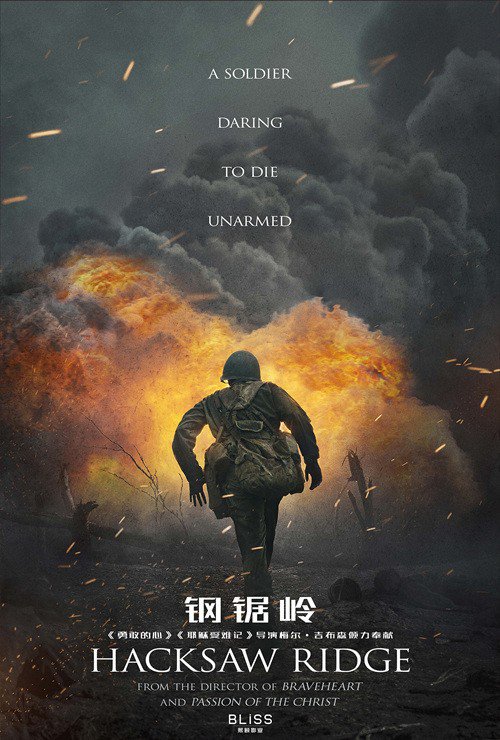 Convictions… all have a context

Anyway, the new movie is one of those “true stories” this one about the remarkable Desmond Doss, a conscientious objector caught in the heart of the war, who refuses to bear arms. At a time when logic, common sense and sheer survival instinct would normally dictate that you defend yourself, Doss displays tremendous courage, loyalty and “grit”. Ultimately awarded the Medal of Honour (ok Honor for Americans) for his actions in the battle of Okinawa, which was undoubtedly deserved.

Much is made of his faith (and many will) yet, this is certainly a powerful and moving story, however there seems to be some confusion about holding convictions, particularly religious ones, which is not explored. What is arguably more relevant is a context of harsh misery, alcoholism, domestic violence and an overwhelming need to be the saviour to his mother, perhaps to his father too, which of course is outworked in his adult life to great effect.

So as we currently witness yet more human suffering in Syria and politicians posture for moral high ground, I am simply of the view that war is vile, rarely an actual resolution and reflects nothing other than failure to understand difference. Yet despite obvious lessons from history, leaders continue to send people into battle as though part of an enormous game of chess. Culturally we have made a sport of violence on an industrial scale.

As you consume the news this week and are reminded of the ominous spectre of the cold war, hear about the new oil negotiations and witness politicians that appear to be without any moral compass or sense of humanity, jostle for positions of power, it is little wonder that “the markets” will exhibit signs of nervousness in the coming days, because deep down, we know how utterly stupid our leaders can be.

The full carnage of Hacksaw Ridge can be seen at cinemas in November. It is a powerful, moving story with pertinent life lessons that you already know, of course if we choose to heed them is another matter entirely.

As for your financial planning, well – nothing so deserving of a medal, but as we approach the end of the year, I wonder how many lessons once, twice or more often learned, have been learned again this year. Taking the long-term view, avoiding the assault of the media on your nerves and keeping a calm head are vital elements of not merely surviving investment cycles, but succeeding through them. If you need to know more, pick up the phone or send me an email.