A film with a title to grab attention is currently on release. You may recall the story (from 1973 – which may test your grey matter) of a ransom kidnapping for $17million, add the spice of a well-known Director deciding to reshoot significant segments of the film due to revelations about the original actor Kevin Spacey and there is a bubble of interest.  Captain Von Trapp himself, (Christopher Plummer) a man still obviously enjoying working at the age of 89 stepped in for the reshoots.

Much like the story of Titanic, I’m not too worried about spoilers on this one, I assume that most know the basics of the story. The clear interest in this version of events is the struggle between Gail Harris, ex-wife of one of Getty’s sons (Jean Paul II), to persuade Getty to pay the ransom. Getty, whilst being probably the richest man alive, was a modern-day Scrooge. One can scarcely believe the red phone box installed at Sutton Place, just off the A3 before Guildford – his British home, for his guests to use, but it is an alarming accuracy. 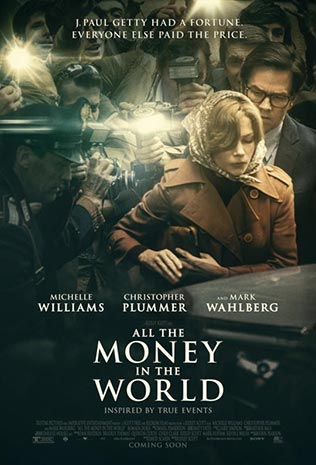 I think it fair to say that the audience I was with were somewhat shocked by Getty. He is portrayed as a man that seems to care little for people, admitting that he had no time for his family as he had to focus on his business. He is reduced to a character that prefers possessions, very beautiful and expensive ones (he was an avid collector) over people. I cannot remember accurately what he says, but effectively that things don’t change, they cannot let you down, they are what they appear to be. In short, his experience of people (from his point of view) has been obviously disappointing. He was married 5 times, the first four each lasting 2-4 years, his final marriage to Louise Lynch lasted 19 years, though ended shortly after their son Timothy died from a brain tumour at the age 12 in 1958, Getty did not even attend his funeral. So, by the time of this story, Getty is divorced 5 times

In many respects, Getty is Trump-like, in that he seems to have a very small circle of people that he trusts and lacks any significant depth of emotional intelligence. If Trump has read a book it was probably “How to be Rich” written by Getty.

The gasps from the audience at some of Getty’s actions and statements reflect the mood of today, mostly connected with the ultra-rich avoiding any taxes and structuring their affairs in a way that will ensure their preservation. The film suggests that Getty only eventually agrees to pay a reduced ransom as he is informed that there are tax advantages….

The sadness is the simple lack of any evident connectedness to another person. Money is simply a way of Getty feeling good about himself and importantly to him, making his own father seem like a pauper.

The Bully and the Buck

The ransom itself is largely about power, money is wanted by everyone, as one communist attests in the film. The very rich want more, perhaps because it increases their sense of security. It is implied that the mafia eventually takeover the ransom, like a business venture, resulting in entire communities unwilling to help a frightened juvenile. A by-product of successfully bullying is wealth.

As for Getty, here is a quick quote from the film, which is of course dramatized, based on true events but by no means a documentary.

Getty wouldn’t get it

Clearly as a financial planner, my role is to help you figure out how much is enough. Getty would not understand such a conversation because he also doesn’t understand living a successful life. There would never be enough, never any satisfaction, never any sense of contentment, never any rest.

Fortunately, a successful life is possible, and a great financial plan can help bring this into reality and last.  You don’t need the fortune of Getty, you need ears to hear and eyes to see and the ability to verbalise what is important to you.

Here’s the official trailer. I gave the movie 6/10. Its too long at 2 hours 12 minutes, you feel a little captive yourself.