A cursory glance of any media and it is hard not to conclude that there appears to be high degree of disappointment, disengagement and dislike of the way things are. One of the latest releases “Hell or High Water” exposes the cracked surface of the American dream and perhaps the end of the American empire.

Whilst, by no means a “revelation” we are shown the harsh reality of life in mid-Texas, of the small-towns that have reverted to outposts, now desolate from the financial collapse of 2008 and an obvious lack of opportunity. The only reassurance being the constant nodding oil pumps that imitate the heart monitors that reflect the State of being yet alluding to a deeper malaise.

To my mind the image of Texas already feels like an echo of the past. The gun-loving, property protecting, villain chasing, all seem like a throw-back to watching black and white cowboy films, (which were dated even then). Add a dash of more enlightened native American history, the mess of “How the West was Won” and men in cowboy hats look like pastiches of a past that was never terribly glorious… being a cowboy is of little appeal to a younger generation, who has almost as little “support” now as he did 200 years ago. This is of course, cultural and one of those many moments that someone from Britain is left with the sense of something  got lost in translation – we sound similar enough, but there clearly are profound differences, which can only presumably explain the rise of Donald Trump and his call to “Make America Great Again”… I wonder when he has in mind and for whom. 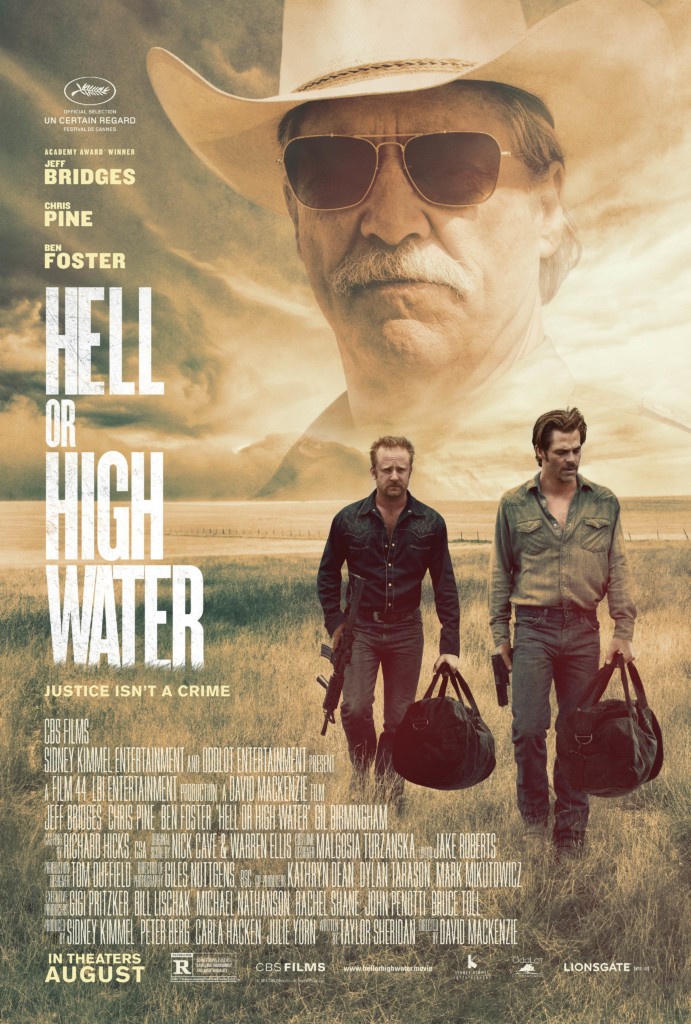 Hell or High Water is set in the context of 2016, but it could be 1816 or 1916. Bank robbers, chased by a local law-man (Jeff Bridges) and posse and just for good measure an Indian guide (Gil Birmingham). Perhaps the writer (Taylor Sheridan – who also wrote Sicario) is pointing to the fact that little appears to have changed (for some). There is still the same degree of desperation and whilst the land was once that of the native Indians and taken from them by white people, now the Banks have taken the land from the white people. All of course within the law, written by those it serves.

Justice is just this…

So it is with some degree of poetic justice that the central character Toby (Chris Pine) decides to rob the very banks that are trying to repossess his late mother’s ranch, in essence, trying to repay the outstanding money with the banks “own” money. To cover his tracks, he even elects to appoint the same Bank to act as the investment adviser to the resulting Trust, a perfect “stick it to the man” using their own systems against them. He enlists the help of Tanner, his elder brother (Ben Foster) who has a deep disregard for anything different, yet clearly yearns for a something much different.

It is possible to simply see this movie as yet another in the chase genre, but my sense is that this is rather more profound, reflecting the desperation in the State of the Nation, which has seen the supposed freedoms that wealth can bring, merely usher in another form of slavery and clusters of circled wagons, requiring ample supplies of guns.

As for a financial planning angle – beware of banks offering umbrellas when the sun is shining, invariably they want them back when it starts to rain. In short, debt in any form needs to be mastered and repaid, the account always needs to be settled…. oh and I guess, have a plan with the end in mind… which includes how your estate is handled.

As for the movie, I really enjoyed it, wonderfully directed by British, David Mackenzie. Here is the trailer.