What Makes Some Great?

What makes some great? genius? or at least excellent? What is it that makes some people memorable or even iconic within our culture? There are a spate of films* that seek to pose this question and one that I saw last night was “Whiplash“. This explores the notion of what contributes to genius and why most of us aren’t. The premise is of Andrew Nieman (Miles Teller) a highly talented jazz drummer who studies at the Shaffer Conservatory, one of the world’s top music schools (don’t most academic institutions make similar claims?) whether it is or isnt is part of the story that we tell ourselves about our place in the world, deserved or otherwise. He is ambitious and highly dedicated to becoming the best, though it isnt always clear if this is meant to be his best or “simply” one of the greats. 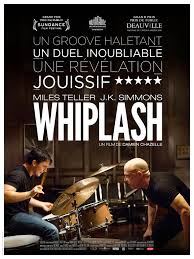 He and his mentor/teacher/bully both live with the hope and belief that genius or greatness is sparked into being by being “challenged” beyond the norms of what others think is a “good job”. Indeed the mentor Terrance Fletcher, (played by J K Simmons) says that these are the two most harmful words in the English language. It would certainly seem anecdotally true to say that adversity can lead people to find strength, stamina, courage and perhaps greatness, however is it a requirement?

The film holds few punches, delivering a barage of insults, mirroring the sweat and blood drenched beaten snare drum. This is one of those more gritty, bloody tales, that suggests you leave part of yourself in your work or perhaps become the work… rather like a line from the 1980 movie and TV spin off “Fame”. The premise is impossible to test. The common myth that binds master and student is that of Charlie Parker, who was humilated for playing out of tune, by having a cymbal hurled at him by Jo Jones, narrowly avoiding serious injury. This we are told, motivated Charlie to practice and be reborn as “great”.

I won’t spoil the plot, I really enjoyed the film – one of the best films about musicians that I have seen. However whilst there are incidents of greatest created from strife, there are countless others that have huge disadvantage and struggles yet never become great or even “known”. The myth itself is an unrealistic portrayal of real life experience, which inexplicably sees different results for different people. Some will argue that this sort of toil and dedication is deserving of fame and success, yet this too is failing to acknowledge that there are countless masses that toil hard for little discernable difference.

So what has this to do with financial planning? well, certainly getting one’s finances in order can feel like an ordeal and a regular request for updates or documents, to some will sound like a demand. However, here we are not trying to create famously successful investors. We are attempting to make your finances work for you, to serve your lifestyle – which implies having a sense of life and style by design rather than by accident. I act as a form or coach or mentor, but certainly not a bully (I hope)… but one that enables clients to make informed decisions and then take action, having got a real sense of what purpose your finances has to fulfil.