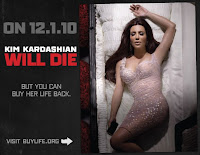 I’m a little envious of the following that Lady Gaga gets via social networking, Twitter – she set a Facebook record of having over 10million fans and also a Twitter record of over 5.7million followers. So I have a long way to catch up!

Anyway, turning this following to something useful – she and several other celebrities have decided to cease social networking until $1million has been received in donations to the “Keep A Child Alive” charity – which is headed by Alicia Keys. Given the following it would only take a few hours before the celebrities are back online – if followers gave $1 each. The idea is that a number of celebrities need bringing back to life – and you pay/donate to bring them back, which taps into the theme of saving lives.
Quite a novel idea, but one has to say that probably $1million isn’t really a “stretching” target given the exposure, wealth and sheer momentum behind the characters involved. Unless of course this is per celebrity, I guess it might be a little embarassing if one or two didn’t make the target – but hats off to their taking part!
We are a boutique firm of financial planners. We create financial plans designed to achieve a desired lifestyle. We will craft and implement your plan that will provide you with the greatest chance of accomplishing your unique goals based upon the values that you hold. Financial products are little more than the tools to achieve your required results
Call us today or visit our website for more information and to arrange a meeting