There is something deeply unsettling about the musical Sunset Boulevard which I saw recently. It is currently on at the London Coliseum and stars Glenn Close, (now 69) who most will know from the 1987 movie Fatal Attraction.

The story is one that examines the Hollywood life, or more accurately, the very short shelf-life of movie stars, particularly female ones. Spoiler alert – this is not a new musical, so I will assume its ok to outline the plot. In essence movie star Norma Desmond (Greatest Star of All) of yester-year has long since been discarded and “forgotten” (personally I’m not convinced that this really rings true). The new generation of actors “who need words” are currently all competing for the limited number of roles… and we all know the stories about the casting couch. As with many things in life, the Hollywood honeypot attracts a great variety of bees, the talent pool is more than sufficient, yet to get a good idea or script turned into a good movie – that’s another matter entirely….”Every Movie’s A Circus”. 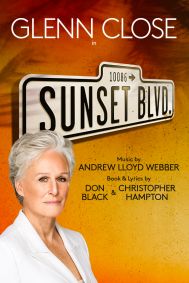 Money or the lack of it, poses problems for “our hero” Joe Gillis, a cynical and weary writer who sees both Hollywood and himself for what they are. Lack or perhaps need (or even desire) leads to compromise. Our writer hooks up with the much older actress Norma, who is portrayed as delusional, perhaps mad, but certainly someone with narcissistic problems. A relationship follows, built upon mutual desperation for something the other appears to provide, yet both are caught up in a self-serving but deceptive story that they tell themselves. “The Lady’s Paying” is a song reflecting Joe’s willingness to let someone else pay… perhaps some self-reflection on this point might result in better questions which move us all forwards about the Panama Papers rather than “how much?”

Whilst I will admit that this is an old story (originally produced as a movie in 1950 by Billy Wilder) so set with that world view, it is frankly all rather too familiar and depressing that older women pairing up with younger men, to feel young are “mad” yet in the very same breath all the male characters pair up with younger women – for the same reasons, and this is “macho”. A woman wanting something, particularly her youth or at least not to be forgotten is typically portrayed as struggling with mental health issues. Yet this is of course an issue that men and women face, with double standards applied by men. The number “Eternal Youth Is Worth a Little Suffering” seems only to point to the outward. Whilst I recognise that this is a period story, it is surely attempting to prompt questions of today… in a culture that is obsessed with appearances, selfies and celebrity…. “I’m ready for my close-up”.

Caught in the Spotlight

The irony of an audience in 2016 largely turning up to see Glenn Close in the title role, merely confirms our fascination with the stars, who now bring considerable ker-ching to the boxes offices of the West End. The audience was enraptured, yet this is certainly not one of the better musicals in the West End, and I was left wondering if the sun had not set on this portrayal of “older” “mad” women. In fairness, it is not clear how old Norma is meant to be, at one point Joe implies that she is 50… (but even in this comment, it is unclear if he is still being “nice”)… so the mere fact that an actress aged 69 playing a 50 year-old rather suggests we have moved forwards, back then women over 35 “didn’t exist”…

Of course, the truth that we all know is that life is short, we cannot deny the aging process and at some point we will become a memory. Hence having a financial plan that reflects your values, not merely your “value” and being in control of your money, rather than it being in control of you, is my way of attempting to address the money/happiness question.

As for the original, here’s the trailer.