You may remember the programme “Walking With Dinosaurs” which was first broadcast on the BBC in 1999. It was a ground-breaking award winning series due to the technical special effects that some clever people at Framestore achieved. One of my clients worked on the series and has since had  a succesful career in Hollywood doing similar things with monsters in movies. Anyway, interest in dinosaurs seems to have been re-kindled ever since, despite the efforts of the character Ross the palaeontologist from “Friends” who attempted to bore everyone to death.

It was only a few days ago that I was blogging about a video suggesting that IFAs will become extinct in 2014 much like the dinosaur. So it was some degree of irony that on Thursday night I was at an award ceremony run by the Financial Times Financial Adviser magazine held, you guessed it, in the Hintze Hall of the Natural History museum in Kensington. If you’ve been there, you will know features a huge Diplodocus. I’d been invited along (noted in our inducement register) by a company that we have used successfully with a number of our clients, very much a new world technology focused company, a company of tomorrow – or at least as far as we can see ahead. I hadn’t been to this annual event before and to be honest, probably wouldn’t hurry to return again. 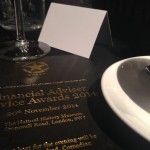 This was a night for service awards, which frankly I thought might have extended beyond “Product Providers” the majority of whom were life and pension companies or mortgage lenders, but it didn’t.

The awards are voted for by advisers, the results were very surprising and seemed to contradict my own experience of dealing with some of the organisations over the years. I have to admit that we don’t arrange mortgages, so I have no idea today who is a good lender when it comes to service, though I have my suspicions.

Whilst I wouldn’t wish to pour cold water on the achievements of those that won, (seriously – congratulations!) it did make me pause to wonder, why advisers voted in a such a way, suggesting that many are still rather trapped in the old world and the old ways of doing things, in fact being advisers that arrange stuff rather than holistically plan, perhaps I’m wrong on this (it wouldn’t be the first time) but the results and event itself were rather… enlightening. I left wondering how many might find themselves in trophy cabinets rather than those that they clutched…. there weren’t any awards for advisers, so its not that I’m a sore loser… its just that I genuinely think the days of the giants within the life and pension industry are seriously numbered. The news on Friday that one giant (Aviva) is seeking to swallow another (Friends Life) for an initial £5.6 billion merely adds weight to my assertion that cannibalism within the financial services industry is still the main diet. Still, it was a fun evening and the people I was with, who were good company, certainly echoed similar feelings to mine.