Ruby Wax is currently on tour with her comedy show “Losing It” in which she partners musician Judith Owen. Having completed a stint at the Edinburgh Fringe and pilots throughout NHS hospitals they have brought the show to the Duchess Theatre in the West End.

The show is poignant and hilarious in parts, relating Ruby’s much publicised struggle with mental illness. She provides some great insights and finds humour in the madness of contemporary life. The pair intend to get the discussion started about the supposedly taboo subject of mental health, which suggests that 1 in 4 adults will suffer from poor mental health at some point in their lives. I’m not sure about the accuracy of the statistics or how this is measured and it would seem that all of us are prone to depression at times. The main thing about mental illness is that it is not generally well understood. A broken arm or serious illness such as cancer invokes sympathy generally, but mental health problems are often dismissed as they are not seen in the same manner. This makes life harder for those suffering with the problem.

One has to wonder at the madness displayed rather obviously in the media and financial services sector. An industry full of people believing that repeating the same behaviour will lead to a different outcome, despite the evidence and experience of the opposite. I could rant on for ages about this, but in essence the credit crunch happened and nothing has really altered to stop it happening again. Indeed the madness is that as taxpayers we merely handed over lots of money to some very overpaid people who have not yet been made to change their ways.  Frankly much delusion exists within financial services and I see evidence of it each week. So the latest revelations of the former Prime Minister and his Chancellor being “at odds” with one another over economic policy, but left in charge of the country and then their plans initially being lauded as “leadership” is hardly surprising.

However, unlike Ruby, who seemed to suggest that pill popping was the answer (which it may be in part, but certainly is not the entire solution) the pill popping of quantitative easing is only a temporary measure. The fundamental reasons and cracks in the system need to be properly examined. There are no easy answers, but only because the questions are pretty difficult and painful to ask, sometimes scary to ask. The markets are finally coming around from a heavy dose of antidepressants, but now the hard work must begin with some thoughtful, serious thinking and counselling of experts who may well think there is another way to live. This sort of work takes time (good therapy does). Some of it will be painful, but real change won’t simply happen – it has to be thoughtfully planned and implemented. There are no shortcuts.

Ruby Wax’s show is running in London until 1st October. It’s a good show, although the second half (a Q&A session) is probably much more hit and miss. If you have an interest in mental health issues, perhaps because of someone you know, SANE are running events with Ruby Wax at the Duchess Theatre on Tuesday’s. 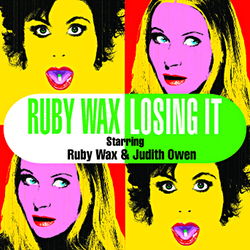