The Inland Revenue, these days known as HMRC, yesterday published its list of 1,172 “aggressive tax avoidance schemes” which are under investigation. These are the sort of schemes that the media has been providing significant coverage and delighting in the opportunity to have a pop at an “A-List” celebrity or two… or rather more. The list is a 2 page document of numbers, looking rather like a sequence from the film “The Matrix” which I asked my design team to parody to make the point. Like it? 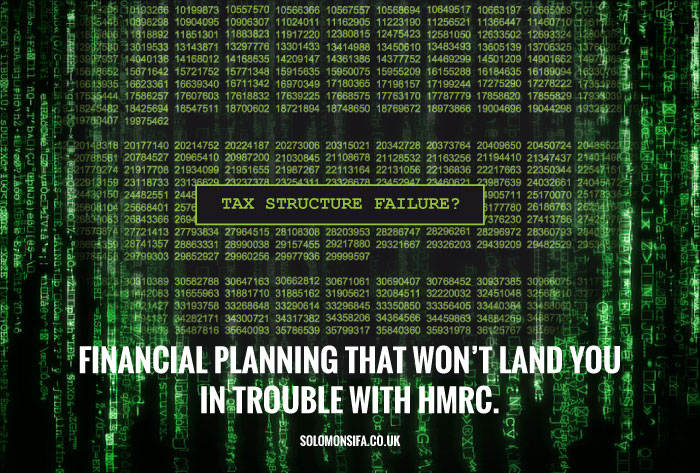 Tax avoidance is perfectly legal, tax evasion is not. Tax avoidance includes everything from investing in an ISA, pension or using your annual capital gains allowance. It would also include moving savings into a lower or non-taxpayer’s name to avoid a higher rate of tax on an albeit puny amount of interest. These are of course “schemes” that are manufactured by the Chancellor and HM Treasury to satisfy number of aims. Firstly, to provide a tax-break for voters. Secondly to encourage saving and therefore reduce reliance on State support and finally to encourage trade, which is how we create jobs, raise taxes and pay our way. Most people with a modicum of intelligence will use tax avoidance schemes if they can.

Tax evasion is illegal, it always has been. Tax evasion is the deliberate and wilful, non-payment of owed taxes. This is effectively the running away to Rio with your millions out of the reach of HMRC. Society loses out and society is cheated and if the tax gap figures are to be believed this amounts to between £31-£35billion each year.

Aggressive tax avoidance schemes are a grey area, hence we are in this mess. To suggest that they sail close to the edge of the rules is fair. Some schemes deliberately creating or manufacturing losses, or moving money around offshore to avoid the UK tax system. As with most things, some of this is more obviously close to evasion than others. The motivation behind it all is to pay less tax, not necessarily to have a fantastic investment return. However in the context of 45% or 50% tax rates, the tax saving is of course a very healthy return. Invariably those that market and manufacture these schemes are paid handsomely (some might say excessively) for their cut of the scheme. For example on £100,000 investment, which might save £100,000 of tax a charge of £15,000 is not uncommon. The motivation is to save tax, because some people pay huge amounts, which they believe is unfair. This is probably due to a belief that Government has no real idea about how to spend wisely. It is often coupled with the idea that personal control over personal wealth is a defining feature of real freedom.

My view is simple. It isn‘t surprising that people want to reduce their tax bill. The tax system could be both simple and fair, but it is highly complex. I believe that this is deliberate. Complexity serves the very wealthy, who are also those with power. However some of these schemes are used by more “ordinary people” not simply the super-rich. People that fundamentally believe that they pay more than their fair share of tax. This is where the debate or argument needs to be had, as there is little real prospect of Governments (of any persuasion) having a simple Tax and Trust system, despite deceptive terms like “Simplification”.

Whatever your view, HMRC are now investigating a huge number of schemes, each of the numbers represents a scheme number. HMRC now has the power to simply take money from your bank account. This process is very much a case of guilty until proven innocent and whilst some will be, not all are, yet this approach could have a very damaging impact. Of course, those that peddle the schemes are usually covered by water-tight contracts with clauses waiving any responsibility and point to “Queen’s Council” as opinion not “fact”. Hmmm.

Anyway, we will not use schemes that “sail close to the edge” of tax rules. We will use allowances and avoidance tools of course, but not the type that land you in trouble with HMRC. There will be no need to dodge bullets…