Skip to content
Fair pay… it all adds up

Fair Pay… it all adds up

If you follow my blog, you will know that I enjoy the arts. A theme that seems to have been gently simmering in the West End has been that of fair pay and protest. There’s nothing new about these issues, perhaps just a regular and frequent part of the human experience, however I wonder whether this also reflects a sense of unrest and unfairness about the current economic world in which we all live.

In the summer I saw The Pajama Game, which is an old 1950’s musical, one with which I have a personal connection as I was in a production of it at school, so there was a sense of reminiscence. The musical (by Richard Adler and Jerry Ross) isn’t that well known but has a few decent tunes. It was largely brought more exposure due to Doris Day in the 1957 film version. The setting is a clothing factory called “Sleep Tite”. There is a dispute between “workforce” and “management” involving pay, throw in a little romance requiring a crossing of lines and you have a recipe with some dramatic tension. 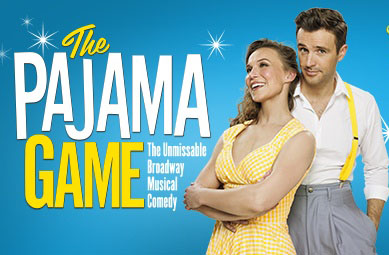 The political aspect of the story revolves around increasing pay, which the workers demand and the management attempts to deflect. The hourly wage rise demanded is an extra 7 1/2 cents (dating the story) and revealing its original source, the 1953 book “Seven and a half cents”  by George Abbot and Richard Bissell. This provides the lyrics for one of the main “numbers” which is one of those very rare songs that includes mathematical calculations.

The song illustrates how a small difference can multiply significantly over time, however as this is financial planning week, I ought to point out a flaw in the logic of the song, that of forgetting about inflation. The maths is “simple” in that is merely adds (or multiplies) it doesn’t calculate who this compounds over time but instead reveals what seven and a half cents extra, every hour, 40 hours every week provides – over 5 years $852.74 over 10 years $1705.48 and 20 years $3,411.96.That said, having checked the maths there are slight errors in these sums.

Presentation is everything and within the financial services world and I don’t want to make this a long post, but suffice to say that if inflation was 3% a year the sums would be rather different over 5 years $905.46, 10 years $1,955.14 and 20 years $4,582.68.The longer that income is decoupled from inflation, the less well off you are. The other point being that future money can sound like a lot more than it is in practice, or in reality – real (inflation adjusted) terms.

Today of course we have a public sector funding freeze, where despite inflation, salaries have remained at the same level. If this were to persist for many years, there would be a real sense of loss. As inflation is currently only 1.3% that means that over the last 12 months £1,000 is now worth £987, to stay at the same level of pay, income would need to rise by 1.3% to £1,013. Hence why many are getting somewhat agitated and expressing the view that their salaries are falling in real terms (they are).

The Pajama Game has now concluded its run in London. The unrest about pay increases has not…