I was very fortunate to have friends in the right places who managed to get tickets for Clarence Darrow, a one-man show at the Old Vic, London. The “one-man” being the highly impressive Kevin Spacey, who many will know from a considerable film career, as well as many television appearances. However, much like the character he has inspired others. In his case, much to the delight of audiences, he has inspired many leading film actors from the US to tread the West-End boards of London, at the Old Vic and elsewhere.

Courageous walk into the future 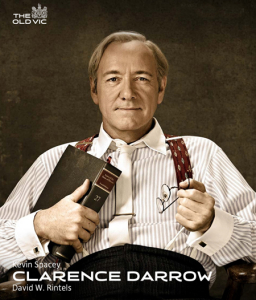 Spacey’s performance of Clarence Darrow was such that a full-house, standing ovation was highly deserved and assured. He magnified the wonderfully written legal history into a compelling story of one man’s stand for the little guy, the underdog. The text is littered with wonderful lines and I’m not sure whether this is the work of the writer David Rintel or Mr Darrow himself (as is often the case, when a great writer meets a great professional). Darrow (1857-1938) was a leading member of the American Civil Liberties Union, ahead of his time fighting injustice and prejudice. Naturally whilst the context may have been different, many of the themes sadly remain current, which is perhaps why Spacey decided to revive the role he first performed 23 years ago in the 1991 film Darrow. Darrow reminds us of our humanity when we are tempted to get caught up in blaming others, seeking to understand, be understood and ultimately to walk with integrity, appealing to take a courageous walk into the future rather than a “backward and barbarous” walk into the past.

As we appear to be at yet other cross-roads in the Middle East and global markets react to news of extremists that step into the void created by fear, it is worth remembering that knowledge is the antidote to fear, not annihilation. This is unfortunately a well worn path that appears to be forgotten and buried much like the desert winds that shift the sands. As Darrow said “History repeats itself. That’s one of the things wrong with history”.